News
At the Gate: Clear skies ahead

On Sept. 12, Porter Airlines began service to Fredericton from Billy Bishop Airport and Ottawa. Nine days later, a similar service began to Saint John. The two additional routes to New Brunswick mark the 23rd and 24th destinations served by Porter in Canada and the U.S. 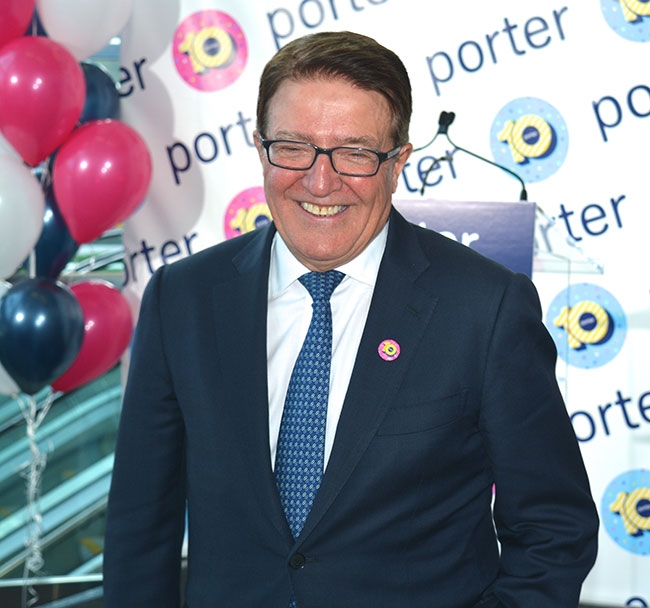 It’s been quite a ride since Porter’s first flight took off on Oct 21, 2006, from Toronto Island Airport (as it was then called) to Ottawa with just 13 passengers on board. In its first decade (it celebrated it’s 10th anniversary last fall), Porter carried 20 million passengers and is on track to carry three million this year alone.

That makes it Canada’s third-largest scheduled service airline, behind Air Canada and WestJet and making Billy Bishop the ninth-largest airport in Canada and sixth-largest in terms of trans-border traffic.

But it hasn’t always been easy. For starters, a group of picketers calling for a boycott of the start-up for being too close to their neighbourhood, jeered as passengers boarded the first flight. Then Porter’s push for a bridge linking the mainland to Toronto Island was blocked by then-mayor David Miller. There is a pedestrian tunnel instead.

And finally, Porter’s attempt to extend the airport’s runway to accommodate Bombardier C Series jets was shot down by a number of different parties, including federal transport minister Marc Garneau.

“That decision kind of shut the door on future material growth at the island airport,” said Robert Kokonis, president and managing director of Toronto aviation consultants AirTrav Inc. “Porter’s in a bit of a bind right now, quite frankly.”

But Porter CEO Robert Deluce doesn’t see it that way. “There are still lots of places we can develop our regional service. There are also opportunities for Porter to focus on our key markets (from Billy Bishop) like Ottawa, Montreal and Halifax. There are also opportunities to increase markets in the U.S., especially when we get U.S. customs pre-clearance, which will allow us to offer service to New York and Washington. We already carry over 400,000 outbound passengers to the U.S. from Billy Bishop.”

And if Porter is destined to remain a regional carrier if it can’t operate the C Series out of Billy Bishop, Deluce takes a philosophical point of view. “Even as a regional, we operate as far south as Florida and as far west as Chicago. In my view, it’s not if, but when we will be operating jets. We were caught up in the politics early in a new government’s mandate. Without the jets, we still have short to mid-term growth opportunities.”

Porter still hasn’t cancelled its conditional order for up to 30 C Series jets, although Deluce said people shouldn’t read too much into that, other than it is keeping all of its options open.

As for the bridge not being built, Deluce said it was a blessing in disguise. “There was nothing before, other than upgraded ferries which continue to operate. Looking back, the bridge was supposed to be a lift bridge, which would allow boat traffic to pass through in summer. But it was designed to accommodate about 800,000 passengers a year and we’re now closer to three million passengers.”

Porter will continue to largely employ the hub and spoke model from Billy Bishop where it holds 85 per cent of the 202 slots, with Air Canada holding the balance, but is gradually introducing more direct flights that don’t require a stop in Toronto. But the hub and spoke model helps Porter pick up connecting traffic between Halifax and Toronto via Ottawa, noted Deluce.

Porter took a gamble when it began offering seasonal service to Mont Tremblant a few years ago, but that move has paid off, according to Deluce with up to five flights a week during the peak winter season. And demand hasn’t decreased after Porter began offering winter service to Burlington, Vt. with more ski hills to choose from. “We’ve built up a tremendous loyal following in Tremblant, especially with those that have homes on the mountain.”

Will Porter ever consider going public to raise capital? “We looked at it in 2010, but the market went sideways and decided not to go ahead with it,” said Deluce, who was inducted into the Canadian Aviation Hall of Fame in the fall. “We’ve raised additional funds internally. We effectively have no debt. Perhaps with the purchase of jets, we might consider going public. But right now, it’s not a priority.”

What is a priority is to continue offering its customers the best flying experience possible, said Deluce who only sees clear skies ahead.