The business jet industry’s near-term outlook is counter-intuitive. “Common sense dictates that as more jets are sold the industry’s total shipment values go up. That may no longer be the case for the time being” reveals a new forecast from aviation analyst Brian Foley. 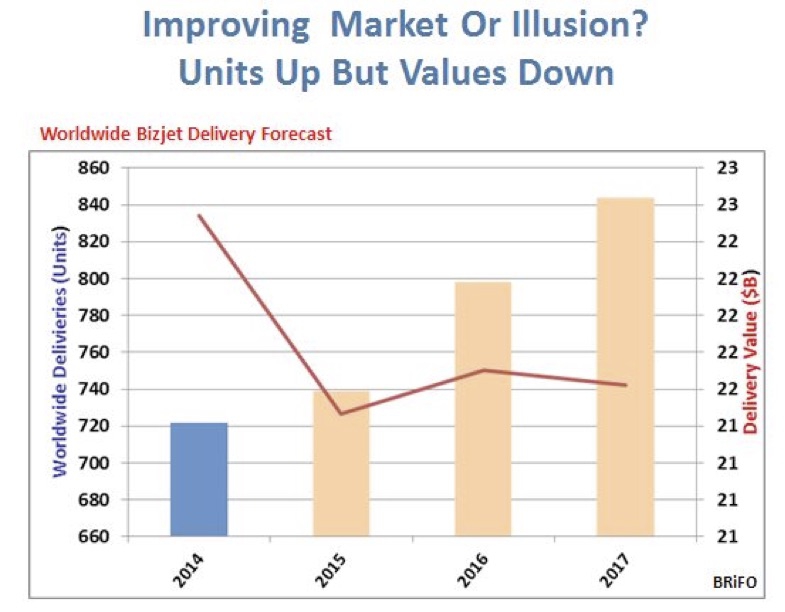 Worldwide business jet shipments toppled from a high of 1317 units in 2008 to a measly low of 672 in 2012. As to be expected the combined dollar value of these deliveries decreased in concert. Foley believes that beginning this year, contrary to conventional wisdom, the number of units delivered will continue to track upward as they have been with one notable exception — total shipment values may actually decrease or remain flat.

The reason, states Foley, has to do with a change in the mix of aircraft that will be sent to customers. Referencing his September 5, 2015 press release on weakened demand for the biggest, most expensive jets, Foley reasons that future shipments will contain a greater proportion of less costly small and medium jets. Thus, even though more jets will be built their average retail values will be less as the sales center of gravity shifts towards the lower end of the market.

Although more small and mid-size jets are being sold “you have to sell up to 10 of them just to offset the value of just one big Gulfstream lost sale”. The net effect is that over the next couple of years more units will go out the door without moving the needle on overall industry values. “This anomaly won’t rectify itself until 2018 when a slew of new, large, pricey jet models from Dassault, Bombardier and Gulfstream hit the market.”

For the next decade Foley predicts 8594 business jets worth $238B will be built, during which time this atypical unit/value excursion will work itself out. “Dollars have always been the more relevant health metric than units. From this perspective the business jet recovery, although verifiable from an increasing unit perspective, is perhaps for now just running in place.”