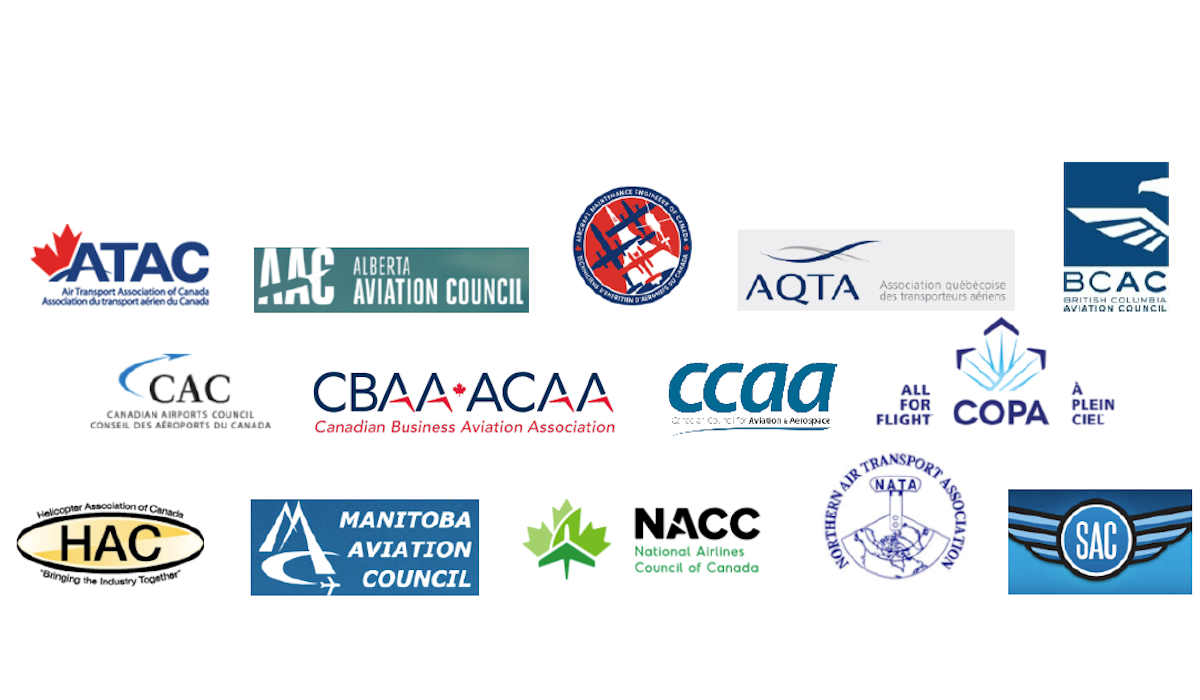 Some of the most powerful associations representing Canadian aviation today sent a letter to Prime Minister Justin Trudeau and some of his key cabinet members asking for the Federal government to provide specific measures of support. Addressed to Trudeau, the letter was also sent to Marc Garneau, Minister of Transport; Bill Morneau, Minister of Finance; and Navdeep Bains, Minister of Innovation, Science and Industry.

The group of 14 associations, holding their own unique membership needs, presented 10 critical common measures for the government to consider. The associations describe these measures, listed below within the full text of the letter, as industry-wide actions the government can take to help Canadian aviation return to a state of economic health as quickly as possible. The associations also began a social media campaign – leveraging #CanadianAviation – focusing on their call for government action.

We’re proud to stand together and support #CanadianAviation. We’ve asked @JustinTrudeau and our government to support our industry. We’re #inittogether and stand ready to get Canadians and our economy moving again.#COVID19 #cdnpoli #bizav pic.twitter.com/g5fHcTIxBx

Over the past weeks, members of the Canadian aviation industry, through individual sector associations, have been in contact with your office and with officials at Transport Canada, and the departments of Finance and Innovation, Science and Industry among others on short- and longer-term actions to support the aviation sector’s efforts to keep essential services, trade and goods flowing to and through Canada.

While we are focused on the essential services that the aviation community is delivering today, Canada’s aviation leaders have begun to identify the elements needed in the near future if we are to emerge from this crisis ready to support Canada’s economic recovery. Time is of the essence and our ability to respond effectively will translate to how quickly Canadians and our economy get moving again.

To that end, we the undersigned, represent Canada’s aviation associations and have come together to identify industry-wide actions that the government can take that would allow our businesses to help their passengers, customers, students and communities to return to a state of economic health and normalcy as quickly as possible.

We are already reaching out to the ministers and departments who have direct oversight on these issues. But it is also important to share with the government how these actions will not only support aviation businesses and jobs, but how they in fact will bolster the Canadian economy as a whole. The following is a summary of requests to government from the combined aviation businesses that are represented by our associations for short-term relief as a matter of urgency:

• An extension to the Canadian Emergency Wage Subsidy set to expire June 5th;
• Financial support for all of Canada’s air operators, airports, maintenance, repair and overhaul organizations, and flight training units devastated by the impact of COVID19;
• Ensure that all airports, regardless of ownership model, are eligible for all support programs implemented to combat COVID-19;
• A suspension of all federal excise and carbon taxes on jet fuel and av gas;
• Federal financial assistance for air navigation charges incurred for flights flown during this pandemic period;
• A suspension of passenger ATSC charges for flights flown during this pandemic period;
• Extended rent relief for National Airport Systems airports;
• Extend the Canada Emergency Commercial Rent Assistance (CECRA) program to all airports, regardless of ownership model, helping Canada’s air operators, flight training units and airports;
• Subsidies to support upskilling and reskilling of our workforce; and
• An extension of the deferrals on current regulatory implementation and consultation processes that are not related to the pandemic.

We are prepared to discuss these and other measures with department officials in greater detail and look forward to working with the government on the actions required to build our new economy.