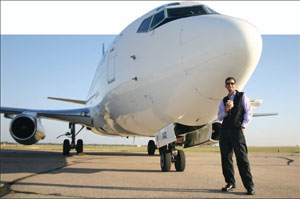 A year ago, Wings magazine reported that Canadian fixedwing flight
schools were enjoying healthy enrollments and generally good economic
times. Well, 12 months have gone by and the boom is showing no sign of
letting up.

How
well is the industry doing? “At ATAC 2006 in November, 95% of flight
school operators said they were having a very good year, and that they
were very busy,” says Dennis Cooper, CEO of Sky Wings Aviation Academy
in Red Deer, AB and chairman of ATAC’s flight training committee.
“Student enrollments are pretty much up across the board.”

WHAT’S DRIVING THE BOOM?
There
are a number of reasons why Canada’s flight schools are busy these
days. The first factor is the ongoing departure of ‘baby boomer’ pilots
as they hit retirement age. As these pilots leave the major airlines,
replacements are hired from regional carriers. In turn, these airlines
hire new pilots from air taxi and commuter companies, who then call on
flight schools for replacement staff. In addition to pilots retiring,
“the airlines are getting bigger,” says Adam Penner, operations manager
at Harv’s Air pilot training and air taxi service in St. Andrews,
Manitoba. “WestJet continues to expand, and Air Canada seems to be on
the mend.”

Then there’s the demand from overseas carriers,
especially those in Asia. “These airlines are incredibly short of
pilots,” says Emilio Tarsitano, president of Island Air Flight School
and Charters, which is based at Toronto City Centre Airport. “According
to an article I just read, in China alone they’re shy 9,000 to 12,000
pilots.” Put it all together, and these are good times to find work as
a commercial pilot. “We’re seeing a lot of our students getting
positions in the air taxi and commuter airlines,” Penner says. “Even
those who’ve been sitting on the fence waiting for the industry to pick
up are now getting work.” Tarsitano adds: “We’re seeing people who
haven’t flown in 4-5 years getting back into the industry. Given how
much demand there is out there, I expect this pace of hiring to
continue for the next 3-4 years.”

So why are students making the trip to
Canadian flight schools? One reason is a lack of flight schools
overseas, Penner says. “The demand for pilots is very strong and they
just don’t have the infrastructure to quickly and properly train them.”
Another reason is cost. “When you look at the flight school market in
England and France, it is too expensive for student pilots to train
there,” says Cooper of Sky Wings. “Comparatively speaking, learning to
fly in Canada is quite affordable. Besides, the weather here is very
good for flight training.” For East Indian students, a shared colonial
history makes Canada a particularly attractive place to learn. This is
because “Canadian flying regulations are very close to British
regulations, and India still goes by the British regulations,”
Tarsitano says.

Finally, Canada has a very strong reputation for
training pilots, Cooper says, one that goes back to World War II and
the British Commonwealth Air Training Plan, in which Canada served as a
major training base for allied pilots. Penner adds that this reputation
can have a very positive effect on a successful student’s career
prospects in India. “It’s common for the Indian pilots to leave us and
go right from a little twin to a 737. It happens all the time.”

All
this demand begs the question: How do international students learn
about Canadian flight schools in the first place? In the case of Harv’s
Air, “They find us through the Internet and word of mouth,” Penner
says. “What happens is that people who were trained here go home happy,
then tell their buddies and they attend.” Meanwhile, Island Air’s
Tarsitano actively promotes his school overseas. A case in point: “I
went to India and made presentations about Island Air in Delhi, Mumbai
and Bangalore. I advertised in the papers and held the events at local
hotels. About 300 in all showed up.” Aiding Tarsitano’s pitch is that
Toronto has a thriving East Indian community relatively close to his
school. This makes it easy for Indian students to live in a culturally
familiar setting while in Canada, minimizing their culture shock and
allowing them to focus on learning to fly.

CHALLENGES
Prosperity
brings its own problems, as the Canadian flight school industry well
knows. One of these is keeping up with demand while struggling to keep
instructors on staff. With so many airlines seeking pilots, lots of
opportunities are available to instructors wanting to move up.

A second
challenge is keeping up with technology, both in the cockpit and the
classroom. In particular, “there is a lot of interest in the industry
to buy new, more advanced simulators to help manage the risk of flying
instruction,” says Cooper. “It makes sense: the more hazardous flying
that can be taught safely on the ground, the better it is for students
and the schools who have to pay for insurance.”

Speaking of
insurance costs, the good news is that rates have stayed pretty steady
since their post-9/11 jump, says Penner. However, trying to keep up
with rollercoaster fuel rates has been a real headache for school
owners. “The biggest variable we’ve been dealing with is how high
prices went a few months ago, and how low they are right now,” he
explains. “It makes it difficult to set our tuition fees, and to quote
them for the future.” This said, the fact that insurance rates have
been stable means that they have stayed high. This has cut into other
forms of revenue generation, says Cooper. “It used to be that schools
could rent their twins out at slow times to pilots, who would then rent
them on a per-use basis,” he explains. “Thanks to today’s high
insurance rates, I don’t know of any schools that would do that now.”

Nav
Canada’s decision to charge $10 every time a 3-tonnes-or-less small
aircraft uses one of the country’s seven busiest airports (Vancouver,
Calgary, Edmonton, Winnipeg, Toronto’s Pearson, Ottawa, and Montreal’s
Trudeau) is also raising hackles. “The new Nav Canada fee is very
annoying,” says Penner. “We used to have to pay on a per-airplane
basis, but now the biggest airports are charging per use, which is
pushing up our costs. All we can do is to pass on these extra charges
to our students, which doesn’t help them pay for their education.”

THE FUTURE STILL LOOKS BRIGHT
These
problems notwithstanding, the next few years look good to Canada’s
fixedwing flight school operators. Those we spoke to anticipate demand
staying strong for the immediate future, as air travel increases and
experienced pilots retire.