The world’s commercial aviation community, with strong support from the Canadian government and Canada’s international airlines, have taken a cautious but decisive step toward curbing the effects of aircraft emissions in the coming decades. 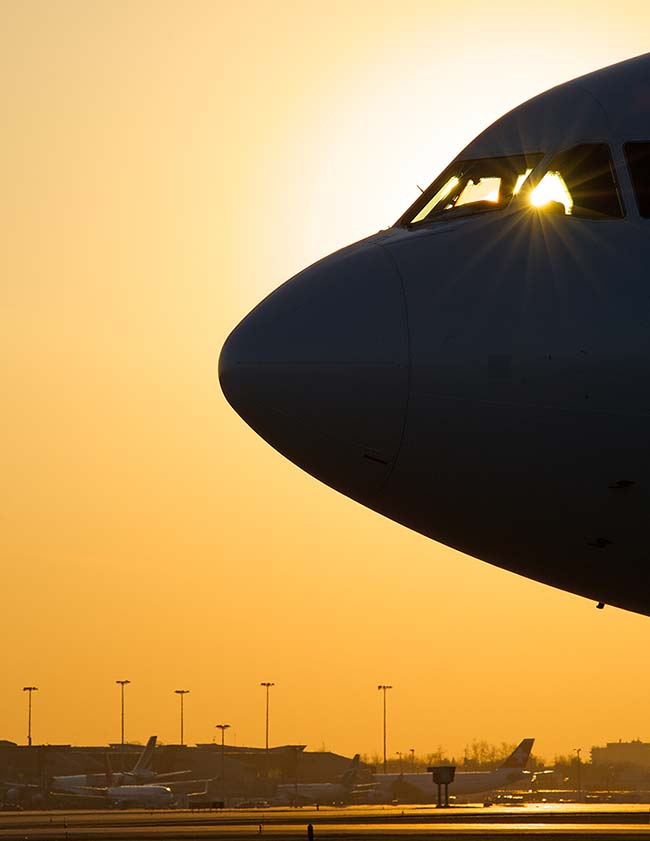 The new international aviation agreement is expected to reduce emitted carbon by about 2.5 billion tonnes. The world’s commercial aviation community

At the 39th Assembly of the International Civil Aviation Organization (ICAO), which has its headquarters in downtown Montreal, 65 member states volunteered to participate in the Carbon Offsetting Reduction Scheme for International Aviation (CORSIA), which targets “carbon-neutral growth” from a baseline year of 2020.

CORSIA applies only to international flights – in the case of Canadian carriers, Air Canada, AirTransat, Porter Airlines and WestJet. International flights worldwide account for about 1.3 per cent of global manmade CO2 emissions annually. Domestic airline flights, which add another 0.7 per cent emissions, fall under the Paris COP21 accord reached last December and which goes into effect in November.

International aviation’s agreement is expected to reduce emitted carbon by about 2.5 billion tonnes, according to an Environmental Defence Fund calculation. That’s roughly equivalent to taking 35 million cars off the roads every year.

“I am delighted that ICAO adopted a global market-based measure to make civil aviation carbon neutral. This is the first global agreement to reduce greenhouse gas emissions since COP21 in Paris, and I am extremely proud of the leadership role that Canada played in the negotiation of this global deal,” Marc Garneau, Canadian minister of transport, said. “I had the honour of being involved with transport ministers of several key nations in order to get final consensus on this critical issue. As host country, Canada remains deeply committed to providing all the necessary support to ICAO and its diplomatic community.”

“Aviation can now claim its ‘Paris moment’, ” declared ICAO council president Dr. Olumuyiwa Benard Aliu. “Air transport is not only the world’s first major industry sector to adopt a global approach to international emissions reduction, but very importantly states representing more than 83 per cent of international flight operations have volunteered to participate from its earliest stages. It has taken a great deal of effort and understanding to reach this stage, and I want to applaud the spirit of consensus and compromise demonstrated by our member states, industry and civil society.”

The National Airlines Council of Canada (NACC), the trade association representing Canada’s largest passenger air carriers, applauded the CORSIA compromise. “We would like to thank the Government of Canada for its proactive and instrumental effort in achieving this global consensus for this historic agreement,” said George Petsikas, acting interim executive director of NACC. “NACC recommends the Government of Canada use the ICAO model to create a similar federal offset mechanism specifically for emissions from airlines operating domestically, which experts have concluded will reduce emissions and keep the Canadian industry competitive, supporting future growth.”

The agreement has the strong backing of the airline industry. Alexandre de Juniac, new director general and CEO of the International Air Transport Association (IATA), which is also headquartered in Montreal, said, “The CORSIA agreement has turned years of preparation into an effective solution for airlines to manage their carbon footprint. This agreement ensures that the aviation industry’s economic and social contributions are matched with cutting-edge efforts on sustainability. With CORSIA, aviation remains at the forefront of industries in combatting climate change.”

“We thank the government negotiators who have worked so hard to deliver a scheme which will successfully balance the growth in air transport and all of the economic and social connectivity benefits that it brings, with the need to address CO2 emissions from the sector,” added Michael Gill, executive director, Air Transport Action Group (ATAG).

The Cost of Carbon
CORSIA is not a tax but rather an offset mechanism in which airlines pay for excessive emissions by purchasing carbon credits in other industries such as forestry. It is expected to cost airlines $5.3 billion annually in the early years and as much as $23.9 billion a year by 2035.

Shortly prior to the Assembly in September, in order to foster broader consensus, ICAO eased off on a previously proposed, more aggressive mandatory timetable by making the initial phases voluntary.

The final agreement calls for:

Nonetheless, about 65 per cent of emissions growth above 2020 should be covered in the pilot and first phases, and roughly 80 per cent during the second phase of the program.

Airlines that keep their emissions down through more fuel efficient planes and aircraft operations will spend less on carbon credits. WestJet, for example, which claims “one of the youngest and most fuel-efficient fleets in North America,” has reduced fuel consumption by 45.6 per cent from 2000 to 2014. Air Canada, in a 2014 study by the International Council on Clean Transportation (ICCT), ranked tied for fourth among transatlantic carriers in fuel burned per passenger, at 33 passenger kilometres per litre.

There are exemptions in the ICAO CORSIA plan for the least-developed countries, land-locked developing countries, and small island developing countries. However, several otherwise exempt states such as Burkina Faso, Costa Rica, Guatemala, Kenya, Marshall Islands and Papua New Guinea have announced their intent to participate.

Operators producing less than 10,000 tonnes of carbon emissions or aircraft under 5,700 kilograms mean take-off weight, such as business aircraft, are technically exempt as small emitters. The small emitters exemption was developed in coordination with the International Business Aviation Council (IBAC), of which the Canadian Business Aviation Association (CBAA) is a member, represented by CBAA vice chair Scott McPherson. “The framework agreed at ICAO will help us meet our collective industry commitments while also taking into account the needs of small operators,” stated Kurt Edwards, director general of IBAC.

The 65 countries to volunteer for CORSIA thus far (of 191 ICAO members) include Canada, the U.S, China, and the European Union’s 44-nation aviation conference (which had threatened to continue its Emissions Trading Scheme, adopted in 2008, if CORSIA did not fly). Russia and India are among those who have not signed on to the voluntary phase.

Teresa Ehman, Air Canada’s director for environmental affairs said, “We’re prepared to take a bit of pain if we can get some global consensus. If it’s not a global solution, we’re going to fall into this patchwork of regulatory approaches, and there will be all kinds of distortions and inequities in the market.”

“The agreement is not perfect – few are,” said Nathaniel Keohane, vice president, global climate, environmental defence fund. “But it does provide a vital basis for moving forward. The first key step will be developing strong standards to ensure transparency, environmental integrity, and even broader participation.”

Next steps to be worked out include a methodology for monitoring, reporting and verification of individual operators’ emissions, what types of carbon offset credits can be used by aircraft operators to meet their compliance obligation (Emissions Unit Criteria), and the electronic registries to be used for holding and transferring the relevant offset credits.

At the ICAO World Aviation Forum preceding the Assembly, Bombardier Commercial Aircraft announced an aerospace industry first with publication of an Environmental Product Declaration (EPD) for its CS100 aircraft. The EPD, based on life-cycle analysis data verified by the International EPD System environmental declaration program based in Sweden, discloses information about the life-cycle environmental impact of products and thus a fair comparison of products and services with regard to their environmental performance.

Canada’s Aero Enviro Action Plan
More than 10 years ago, the Canadian aviation industry and Transport Canada signed a voluntary agreement to address greenhouse gas emissions. They met both of their targets: an average of 1.1 per cent per year improvement in litres of fuel per revenue tonne-kilometre (achieving 1.7 per cent), and a cumulative improvement of 24 per cent in 2012 compared to the 1990 baseline (achieving 30 per cent).

In 2012, they created Canada’s Action Plan to Reduce Green House Gas Emissions from Aviation, setting an aspirational goal in fuel efficiency improvement of at least two per cent. Key areas were fleet renewal and upgrades; more efficient air operations; and improved capabilities in air traffic management. Canada’s is one of 101 state action plans now in place.

NACC carriers achieved a 1.32 per cent average annual improvement in fuel efficiency and achieved a reduction of 11.22 mega tonnes of CO2-equivalent (CO2e) between 2005 and 2015. But a review of the Action Plan in 2015 determined that the aspirational goal of two per cent per year improvement would be “difficult to achieve.”

Coincidentally, at the same time as the ICAO Assembly, Canadian environment ministers were meeting in Montreal to discuss a national carbon reduction plan when prime minister Justin Trudeau announced that the federal government will impose a $7.62 per metric tonne tax on carbon beginning in 2018 and rising to $38.11 by 2022. Some provinces already have their own carbon tax on gasoline, diesel, propane, or aviation fuels, such as British Columbia at $22.87 per metric tonne.

The new international aviation agreement is expected to reduce emitted carbon by about 2.5 billion tonnes.

Security Concerns
Certainly there were other discussions and decisions at the ICAO Assembly, though none so nearly as dramatic as CORSIA.

The week before the Assembly, the United Nations Security Council adopted Resolution 2309, affirming that all states have the responsibility to protect the security of citizens and nationals of all nations against terrorist attacks on air services operating within their territory.

“The high-profile landside airport attacks in Brussels and Istanbul earlier this year were a tragic reminder of the enormous challenges faced in securing public areas, the inseparability of aviation security and national security, and of the economic and social consequences of terrorism,” remarked Dr. Fang Liu, ICAO’s secretary general. “An important aspect of our work involves mobilizing political will for the improvement of national capacities.”