In Canada and around the world, commercial aviation safety has improved significantly over the past few decades. General Aviation safety has also improved, but not as much. Accidents related to weather and mid-air collisions still claim too many lives. In 2017, U.S. commercial carriers flew 18 million hours without a single fatal accident, while General Aviation flew slightly more hours but had more than 200 fatal accidents.

In the U.S., the FAA has mandated and deployed ADS-B as its next-generation air traffic system. A study by AOPA shows that ADS-B has led to a significant improvement in General Aviation safety in the U.S.

NAV CANADA is a founding partner of Aireon, which implements space-based ADS-B for airliners. Aireon satellites receive ADS-B Out from aircraft and downlink the information for use by ATC. ADS-B Out is not currently mandated for GA aircraft, but, within a few years, it may become required wherever transponders are required today.

Aerion satellites do not broadcast weather or traffic information directly to aircraft. In our larger country, with far fewer GA aircraft, a coast-to-coast ground station network has been seen as prohibitively difficult and costly to implement. Aircraft equipped with ADS-B In will receive ADS-B Out from nearby aircraft. Weather and other traffic information would be unavailable in most of the country, with limited information received only when flying within range of U.S. ground stations. 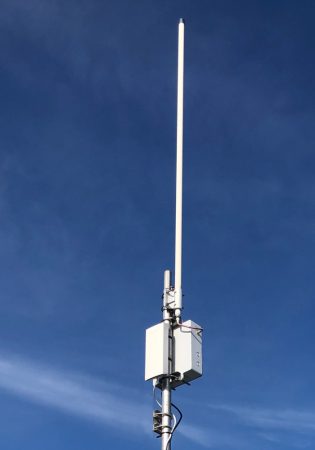 A CIFIB transmitter at CZBA, Burlington Executive Airpark Airport, which served as a development and testing site for the past year. (Photo: CIFIB)

Bringing in-flight weather and traffic to Canada
A group of aviation enthusiasts, based in Southern Ontario, has developed an inexpensive ground station solution that transmits weather and traffic to aircraft equipped with hardware designed and used for the FAA’s ADS-B system. The group has started building a Canadian network from the ground up. (Because of the pandemic and new lockdown measures introduced in April, the group’s efforts are delayed by several weeks.)

The plan is not to cover every part of Canada, but to install ground stations and grow the network based on demand and support from local groups, bringing these safety-enhancing services to their area.

Burlington, ON (CZBA) has been operating a development and testing site for the past year. Stratford (CYSA) will be the first official station, coming online in May. Parry Sound (CNK4) and Oshawa (CYOO) are planned for June. CIFIB is in discussions with several other sites across Canada that could begin operation in the next year. The CIFIB network is expected to grow to about 100 ground stations within a few years.

Planned services include NOTAM, AIRMET/SIGMET and TFR. CIFIB is working to expand traffic information to include Mode C (radar) traffic.

Equipment requirements
Receiving CIFIB broadcasts requires an ADS-B In receiver capable of decoding UAT on 978 MHz. There are many solutions available today, developed for use in the U.S. Many Canadian pilots use them, too, as a GPS source, to receive ADS-B Out from nearby aircraft, to receive weather from U.S. ground stations, and for flying in the U.S.

Portable ADS-B In receivers, costing as little as $250, include Stratus, Stratux, Sentry, SkyEcho, Dual and the Garmin GDL series. Weather and traffic information is displayed on moving maps in Electronic Flight Bag (EFB) applications running on a tablet or smartphone. Among EFB apps that provide Canadian maps and charts, FltPlan Go is free, while ForeFlight requires a subscription.

Certified systems can also receive and display CIFIB information. ADS-B Out and In capabilities are usually combined with a traditional transponder and displayed on panel-mount primary and multi-function displays. For example, a Garmin GTX 345 transponder will integrate weather and traffic information on the built-in PFD/MFD displays of a G1000 system.

• CIFIB ground stations transmit traffic data including gliders using FLARM/OGN and flight-school aircraft using NemoScout. In the U.S., these aircraft are not broadcast unless also equipped with ADS-B Out or transponders visible to ground radar.

Cost
Aircraft equipped with ADS-B In can receive CIFIB broadcasts when in range. There is no registration or other action required to receive the data. In other words, to pilots and their equipped aircraft, the CIFIB service is free.

Who is CIFIB?
Canadian In-Flight Information Broadcasting Association is a not-for-profit organization that is creating and managing the ground station network that provides in-fight weather and traffic services to GA pilots operating in our coverage area within Canadian domestic airspace. CIFIB’s mission is to improve General Aviation safety by transmitting available weather and traffic information to pilots in the cockpit to improve decision-making and to raise awareness by promoting the use of this source of information.

The members that created and manage CIFIB are also members of various COPA flights, including Flight 26 (Waterloo – Breslau Flyers), Flight 28 (Burlington), Flight 172 (Kincardine), and Flight 70 (Oshawa). All members are volunteers and receive no compensation from CIFIB. Many have contributed financially to get this project off the ground.

How you can help
CIFIB is working on expanding its network and looking for organizations to partner with us to establish and operate a ground station. Inquire at http://cifib.ca/contact.
Individual pilots and other sponsors are welcome to support CIFIB financially by visiting cifib.ca/donate. All fees and donations will be used to develop, install, operate, and support the CIFIB network.

Disclaimers
CIFIB In-Flight Information broadcasts are advisory only. Pilots must follow regulations and best practices pertaining to determining weather and traffic for activities such as flying instrument approaches and joining the circuit.

Traffic information broadcast by CIFIB may not represent all traffic in the area and must not be used as a primary means of locating and avoiding other traffic.

More information
Visit www.cifib.ca for the latest information about CIFIB.