News
Colouring outside the lines

Adding a dedicated rail line between downtown Toronto and Pearson International Airport has resulted in a healthy overnight jump in the number of passengers arriving and departing the airport by public transport. But with between 92 and 95 per cent still accessing the airport by car, Pearson continues to chug well behind airports such as London Heathrow where over 40 per cent of passengers and employees access the airport on the underground, express trains or bus links. 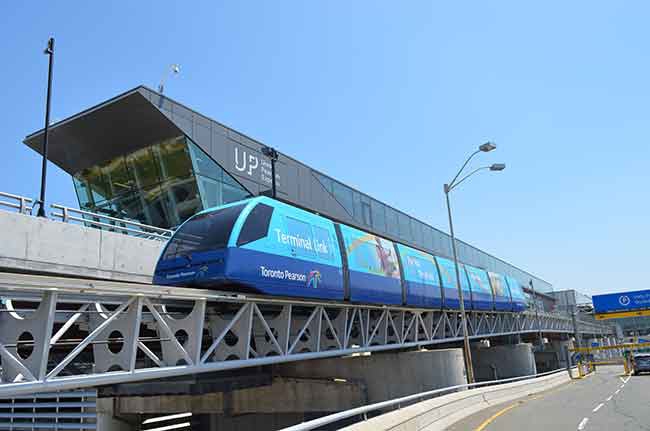 After largely starving the region of transportation investment for over a generation, governments across the Greater Toronto Area (GTA), led by the province, are building desperately needed transit lines again. But with more than $130 billion due to be spent over the next 10 years on new and faster transit lines and electrifying existing commuter rail corridors to handle high frequency trains, planners continue to fall short of closing the loop with Canada’s busiest airport, and the GTA’s second largest employer hub after downtown Toronto.

Case in point: a dedicated rapid transit bus lane in Mississauga, where Pearson is located, will stop shy of the airport when it is completed in 2017. Likewise, Pearson is also cut off from Crosstown, a multi-billion rapid transit line that will run along Toronto’s east-west spine and was originally planned to extend out to the airport.

Operators will add transit connections to the airport. An express bus service that already bridges the gap between the airport and a Toronto subway station is popular with travellers. But as any ground transportation planner will point out, adding steps to break a seamless journey will have a corresponding and largely negative impact on building passenger ridership. Especially when baggage is involved.

The Greater Toronto Airports Authority (GTAA) is looking to insert Pearson into the frame and has identified as part of its long range planning an airport location for a future ground transportation hub, into which transit and even intercity rail would be integrated, adding to the smattering of bus and coach services that connect the airport with surrounding communities.

Modern hubs like Pearson and Montreal can no longer be isolated from rail. The Holy Grail for the multi-modal airport is to be plugged into a broader intercity rail network similar to the high-speed systems at Paris Charles de Gaulle and Frankfurt Airports.

Unlike the sudden bump in passengers using the UP Express, commuter rail and VIA trains to Ottawa from Pearson won’t happen overnight. Still, the GTAA has the main players talking, including three local mayors who were elected last year on transport platforms.

“So many are finally looking at Pearson differently. Right now we are in the middle of the dartboard. Transit [and plans for future transit] rings the airport. We have to think about how we connect with that,” says Hillary Marshall, the GTAA’s vice-president of stakeholder relations and communications.

Pearson is expected to grow to 65 million passengers a year by 2035, volume the already congested highway network will struggle to handle. This only tells part of the story. Total regional aviation demand will swell to over 90 million 10 years later.

Adding a dedicated rail link from Pearson International to downtown Toronto was an essential step in enhancing ground transportation around the airport.

Setting passenger volumes to one side, approximately 40,000 employees work at Pearson directly, with another 235,000 employed in the surrounding area, is building a strong case for improved transit links to get to work.

“We have participated over the years as stakeholders in various studies, but the conversation is now more imperative,” says Eileen Waechter, the GTAA’s director of airport planning. “Planners remember us, and they are beginning to understand the need to connect with us.” Clearly they need that final push.

Against passenger volumes rising almost 80 per cent over the last 25 years, Heathrow has managed to keep road traffic close to 1990 levels. The airport recently unveiled a plan to pull even more passengers and airport staff out of the car.

The GTAA is on a similar track and is currently updating its long-range master plan. “We have identified the physical location for a future ground transportation hub at Toronto Pearson, and we are working to establish connections routings and rights of way. But planning is still in the concept development phase,” Waechter points out. In the meantime, the GTAA will continue to work with existing transit service providers to boost frequencies and streamline services.

There is a complex labyrinth of stakeholders responsible for public transit into Pearson, including four local transit operators, Metrolinx (the provincial transport coordinating agency that also runs the GO Transit commuter bus and rail network, the UP Express and is building the Crosstown rail line, making the failure to roll that service up to the terminal door even more of a head scratcher) and the various levels of government.

“We are at the start of an interesting dialogue with stakeholders in Ontario and the federal government on how we can support growth, and what greater role ground transport can play at Pearson,” Marshall adds. “The UP Express is just the first chapter.”

Tying all services together under a multi-modal roof should be an attractive lure. But even in a pro-transit political environment, bringing all these players onside in what most certainly will have to be a partnered investment means that the GTAA has its work cut out for it. “It’s going to be about the numbers. Transport infrastructure planning doesn’t come without assumptions on forecast ridership,” Waechter insists. That and a huge dollop of political momentum.