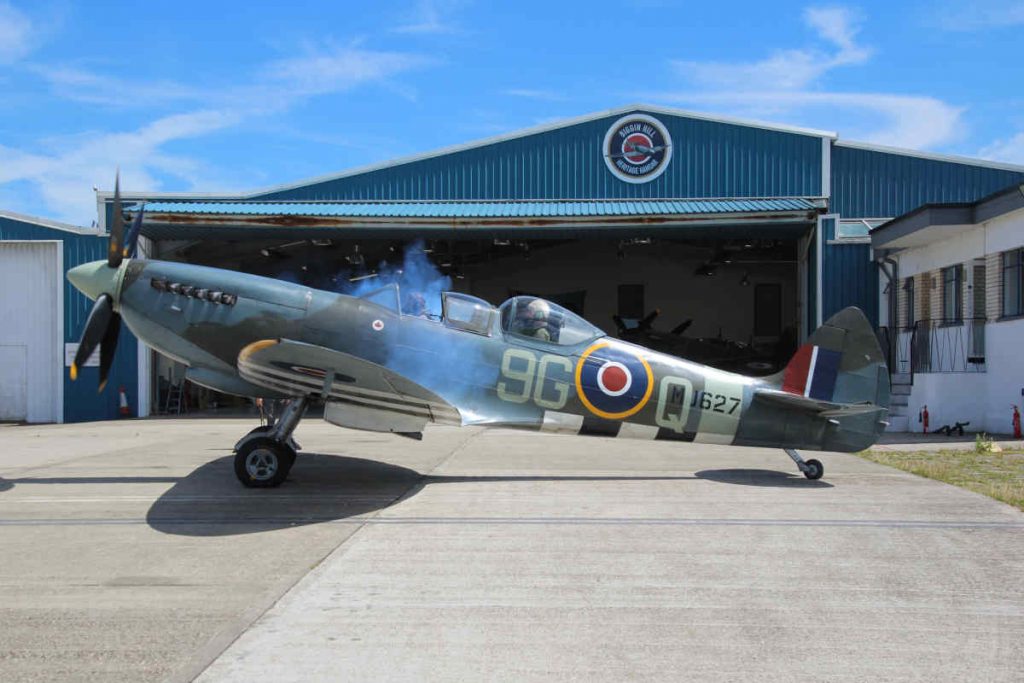 The Heritage Hangar at London Biggin Hill Airport is a unique a restoration facility dedicated to putting Spitfires back in the air, which speaks to a shared heritage with Canada. (Photo: Andy Patsalides)

In the summer of 1916, the Royal Flying Corps was looking for a site for a new airfield. It had to be located very close to London and be free from fog and waterlogging. They settled on a location close to the village of Biggin Hill. The first aircraft arrived the following year and the airfield was later named RAF Biggin Hill and a legend was born. Its worldwide iconic status is richly deserved and its links to Canada celebrated. You can still see and hear Spitfires at Biggin Hill. Indeed, it is home to a Spitfire that served with the Royal Canadian Air Force from 1944 to 1945. Biggin Hill’s reputation may have been forged in war, but it has been strengthened in peace into a world-leading business aviation airport.

Arriving at Biggin Hill for the first time, most visitors are struck by two things: An all-pervading aura of peaceful efficiency and how close it is to London. The airport is free from scheduled flights and low-cost carriers. No long lines of aircraft waiting for their turn on the runway or ramp here. An aircraft is typically lining up on the runway just five minutes after closing its doors. Biggin Hill Airport is the only dedicated business aviation airport within the capital and is already home to more than 65 aerospace activities. The airport is equipped with all the modern navigational aids you would expect in order to allow operations to continue safely in the worst of weather. Should winter close in, two self-propelled de-icing rigs are available.

As a designated UK Port of Entry, customs and immigration officers are permanently based at Biggin Hill, enabling quick clearing for customers and even their pets. Biggin Hill offers business travellers a six-minute helicopter transfer in to the city centre in addition to fast rail and road links. No other London airport can match that. Bombardier Business Aircraft recently opened its second hangar at Biggin Hill. This facility, along with 70 additional technicians, has doubled Bombardier’s capacity. The airport is also home to 11 maintenance facilities representing the greatest concentration of maintenance, repair and overhaul activities in Europe. Also recently opened is the new 60,000-square-foot hangar at Terminal 2. With capacity for six Gulfstream G650-class aircraft, this facility further enhances the level of service on offer. No wonder that Biggin Hill is the fastest growing business aviation airport in Europe.

Plans for a $15.5 million, on-site Aviation College are well advanced. With an anticipated intake of 400 students per year, the aviation engineering future of the UK, and especially Biggin Hill, looks rosy. Passenger facilities are being refurbished and plans are being drawn-up for more hangarage. Also coming is a four-star, 54 room hotel. Biggin Hill offers a range of fixed-base operators.

Biggin Hill welcomed 300 Canadian aircraft movements in 2018. It is ideally placed to provide Canadian business travellers with the safest, secure and most efficient aviation service possible – all tinged with a shared aviation history. The airport is also home to The Biggin Hill Heritage Hangar, a restoration facility dedicated to putting Spitfires back in the air. The hangar is full of historic aircraft, mainly Spitfires, being restored or maintained. It also offers the opportunity for the public to fly in a two-seat Spitfire MJ627, an aircraft rich in Canadian aviation heritage. This Spitfire was built in 1943 and served with No 441 Squadron of the Royal Canadian Air Force supporting post D-Day operations over France and Belgium. Post-war, the aircraft was converted to a two-seat aircraft and, today, the aircraft is the flagship of the Heritage Hangar fleet. It proudly wears the Maple Leaf.

It was The British Commonwealth Air Training Plan that ensured that the RAF had enough aircrew to fight throughout the Second World War. Instigated in Ottawa, ON, Canada trained more aircrew than any other country. Blessed with blue skies free of enemy aircraft, an incredible 131,533 Allied pilots and aircrew were trained in Canada from 1940 to 1944, 72,000 of which were Canadians who would go on to serve with RAF and RCAF squadrons in Europe.

In 2014, the Canadian Warplane Heritage Museum’s Lancaster Bomber crossed the Atlantic to join the RAF’s Lancaster. For a memorable couple of months, the world’s only two airworthy Lancasters were displaying together. On August 14, 2014, both aircraft came to Biggin Hill. A fitting tribute to those Canadian airmen who left their home and travelled half-way around the globe to join the fight for freedom.

Andy Patsalides is the Marketing Manager for London Biggin Hill Airport. He can be reached at marketing@bigginhillairport.com.