The Dash 7 STOL airliner was ideal for air services out of city centre airports such as those in Toronto and London, England. 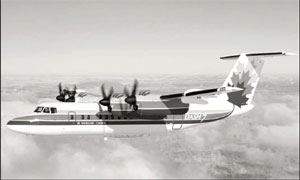 Every once in a while an aircraft comes along which does not make the
impact on the market that it deserves. Such was the fate of the de
Havilland Dash 7, another outstanding product from the Short Take Off
and Landing (STOL) stable of the famous manufacturer at Downsview in
Toronto. The company, now part of Bombardier, had first gained fame in
this segment of the market by producing the Beaver, a rugged bush
plane; a half a century later, the company’s activities are centred
around the Dash 8 which is still very much in production.

The
Dash 7, which came on the market in 1975, was something of a landmark
for de Havilland. While it still retained the STOL performance of its
predecessors, it utilized four, not two, reliable Pratt & Whitney
Canada PT6A turboprop engines. Although a freighter version was
offered, the airplane was designed especially for the commuter market
and would take advantage of short runways at airports closer to city
centres.

For example, the Dash 7 was a natural for the London
City Centre Airport in England with its high approach angle, short
runway and noise-abatement requirements. Closer to home, the Toronto
Island Airport was also suitable for the aircraft. Indeed, both
airports eventually counted the Dash 7 as one of their frequent
visitors, as did a number of Greenland airports with equally short
runways. The aircraft was undoubtedly an inspired design.

However,
reality did not match inspiration. By the time the aircraft appeared,
demand for commercial aircraft was falling. This decline was fueled by
the first oil price hike in the mid-70s, followed by an economic
recession in the early 80s. And the move to smaller, more centrally
located airports failed to develop to the extent the company predicted
when the plane was conceived.

The Dash 7 did, however, have a
number of highly satisfied customers. It was frequently displayed
flying in and out of short runways. It was quiet and easy to fly; in
another day and age it would have been a hit. It was not the first
victim of changed circumstances. Both the Bristol Britannia ordered by
Canadian Pacific Air Lines and the Vickers Vanguard ordered by Trans
Canada Air Lines (TCA) come to mind.

When production of the Dash
7 was terminated in 1982, only 113 of the aircraft had been built. Many
of these are still in operation doing an excellent job on those short
runways.