“We have great ambitions for the Dash 8 program and are excited to begin the next phase for this aircraft under a new company name that recalls some of the greatest innovations in aviation history.” 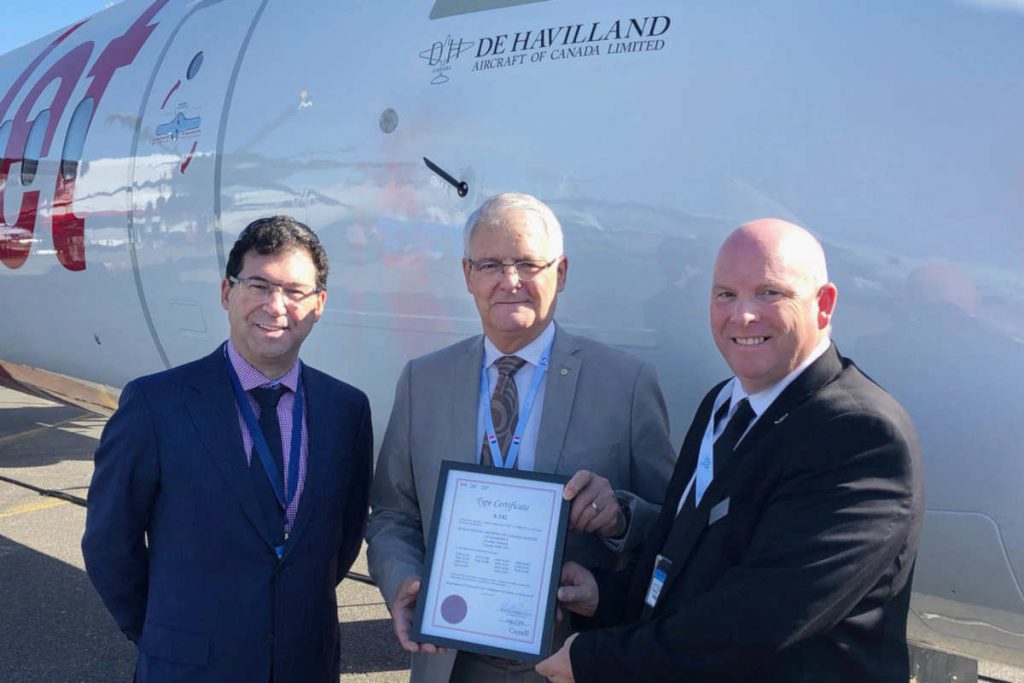 At the Paris Air Show, De Havilland Aircraft of Canada Limited today formally received the Type Certificates for the entire Dash 8 aircraft program, which parent company Longview Aviation Capital acquired from Bombardier, including the 100, 200 and 300 series and the in-production 400. The Type Certificate ceremony follows the launch of De Havilland Aircraft of Canada on June 3, 2019.

The Dash 8 joins Longview’s portfolio of aircraft programs, including the Twin Otter program and the DHC-1 through DHC-7 series, as well as the former Canadair CL-215, CL-215T, and CL-415 waterbomber aircraft.

“We have great ambitions for the Dash 8 program and are excited to begin the next phase for this aircraft under a new company name that recalls some of the greatest innovations in aviation history,” said David Curtis, chairman, Longview Aviation Capital. “There have always been echoes of the De Havilland brand in the DHC type names of many current aircraft, and we are pleased to re-energize the name and to re-introduce De Havilland Aircraft of Canada Limited as an operating company.

“We will be focusing on the cost competitiveness of these aircraft across the lifespan, from production to parts and in-service support,” continued Curtis. “The heart of the Longview Aviation Capital business has been superior in-service support, and we intend to apply that expertise to this aircraft program. In the months ahead we will be investing in this part of the business, in our inventory operations and supply chain processes – all with the aim of positioning us to better serve our customers.”

Also today at the Paris Air Show, De Havilland Aircraft announced the delivery of its first Dash 8-400 aircraft following the completion of the transition of the Dash 8/Q Series aircraft program. The aircraft was delivered to Qazaq Air JSC of Kazakhstan and will become the fifth Dash 8-400 turboprop in the airline’s fleet.

“We are delighted to be included in this important milestone and to receive De Havilland Canada’s first delivered aircraft,” said Plamen Atanassov, CEO, Qazaq Air. “We are very pleased with the operational performance and capabilities of our Dash 8-400 aircraft and are proud to support the transition of the Dash 8 aircraft program from Bombardier to De Havilland Canada.”

De Havilland Aircraft also announced today that TAAG Angola Airlines E.P. has purchased six Dash 8-400 aircraft. TAAG is the state-owned, national airline of Angola. This order was announced by Bombardier Commercial Aircraft on March 29, 2019, as an order from an unidentified customer.

“We are delighted to welcome TAAG Angola Airlines to our family of Dash 8-400 aircraft customers and look forward to also offering the airline our full suite of service solutions,” said Todd Young, COO, De Havilland Canada. “The Dash 8-400 aircraft offers the lowest seat costs, as well as unmatched range and speed versus other turboprops. It also offers an enhanced customer experience and has proven its reliability in some of the world’s most challenging environments, so we are confident that it is ideally suited to meet and exceed TAAG’s requirements.”