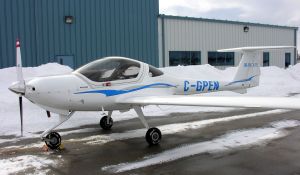 March 13, 2008, London, Ont. – Diamond Aircraft and Maylan Aviation
today completed an order for thirteen DA20-C1 aircraft. This order will
bring the total of DA20s operated by Maylan to 35, making Maylan the
second largest DA20 fleet operator in North America, and the largest
in Canada.

Maylan Aviation is using the DA20 as the cornerstone of its professional
pilot training program, which takes primarily Asian students from 0 hours to
the right seat of an airline in 14 months.

“The DA20 is the perfect airplane for our program. At a fuel burn of less
than 5 gph and very simple, cost-effective maintenance, its economics are
better than any other new training plane on the market,” said Norm Lamothe,
General Manager at Maylan Aviation. “With its modern, composite design, a
cockpit suitable for IFR training, and its excellent handling and safety
record, the DA20 is an attractive aircraft for our students.”

“We are excited that Maylan has chosen the DA20 for their program. We know
our airplane does well in high-utilization flight training environments, for
example, as the plane for the primary flight screening program for the
United States Air Force since 2002, and believe that it is well suited for
the type of professional flight training Maylan provides”, said Peter
Maurer, President of Diamond Aircraft.

About Diamond Aircraft
Diamond Aircraft is the third largest producer of airplanes in the
under-three-ton weight class. Diamond builds the safest, most efficient
general aviation aircraft flying today. The Diamond group of companies has
more than 1,500 employees worldwide and has manufacturing facilities in
Canada, Austria, China and Germany that provide aircraft, type-specific
flight training devices, and related general aviation products and services.