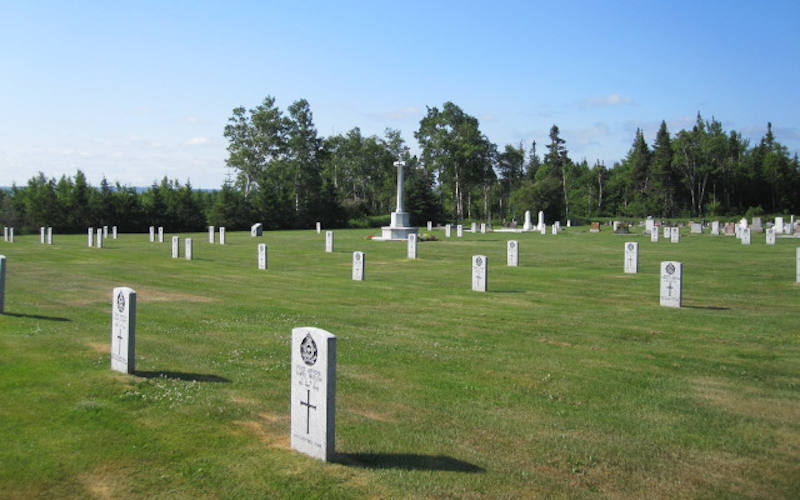 The Gander War Cemetery in Newfoundland and Labrador is located a quarter mile north of the TransCanada Highway, two miles east of the town of Gander. (Photo: Commonwealth War Graves Commission)

As the sun breaks over the central Newfoundland town of Gander on Remembrance Day, the graves of servicemen buried in the town’s Commonwealth War Graves site will slowly start to come into focus.

And those fallen souls of the Second World War will not be alone.

Beneath the sounds of the nearby Gander International Airport, members of the Royal Canadian Legion Branch 8 in Gander will be on hand to remember their sacrifice.

Albeit, the remembering party will be smaller than in previous years due to the COVID-19 pandemic and the regulations that surround social gatherings.

Still, they will be there walking amongst the 100 grey tombstones, each adorned with a cross, their name and rank, and the insignia of their respective branch of the military.

There will be wreaths laid at the base of a large stone cross that reaches toward the sky.

“We ensure we remember and never forget the people buried there,” said Nelson Granter, the president of Royal Canadian Legion Branch 8.

There are also six army soldiers buried at the site — five from the Canadian Army and one from the British Army.

Located at the end of a gravel road that starts from its entrance on the Trans-Canada Highway, the site is not far from another monument to fallen soldiers. In time, a civilian cemetery grew around the Commonwealth site.

Just a short drive down the road is the Silent Witness Memorial, which commemorates the 256 American service members of the 101st Airborne and crew members lost in the Arrow Flight 1285 Crash in December 1985.

The Commonwealth War Graves site dates back to a time when the airbase in Gander, now known as Canadian Forces Base Gander, was an experimental flying station prior to the Second World War.

The base was subsequently upgraded and it became the auxiliary base for the Atlantic Ferry Operation. The base was also responsible for patrolling the western part of the Atlantic Ocean and was known as the centre of the anti-aircraft regiment of the Canadian military.

The servicemen buried at the site in Gander were the victims of aircraft crashes in the area.

The Canadian government decided in 1941 to not repatriate the remains of servicemen and women of the military who died in Newfoundland during the Second World War.

According to information from the Commonwealth War Graves Commission, due to this decision, the Department of National Defence purchased the land near the airport where the cemetery is now to be used for field burials.

“It is very, very important,” said Nathan Lehr, the president of the Royal Canadian Legion, Newfoundland and Labrador Command. “I think about it a lot when I’m driving by the site.

“It is important we honour them.”

The gravesite is a mirror of other similar Commonwealth War Graves located in other countries that were part of the allied forces during the war.

Some see the Gander site as a way to connect the province and by extension the country to continental Europe and those who gave their lives there.

“It is a significant connection to the Allies,” said Granter.