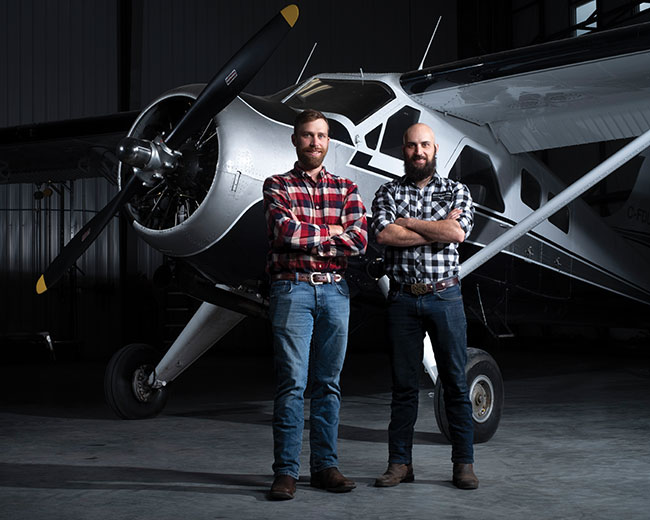 Tintina Air is a Yukon owned and operated air charter business with aircraft based in both Whitehorse and Dawson City. Its diverse single- and multi-engine fleet includes the Canadian classic Beaver bushplane, well suited for lake or river access in the summer and frozen destinations in the winter. Operating year-round, Tintina Air provides 24 hour IFR and VFR charter service with wheel-, float-, and ski-equipped aircraft offering landing capabilities on gravel, water, and snow or ice.

The company primarily leveraged its Cessna Caravan aircraft, flying mining and exploration clients into off-strip locations, throughout late-2020 to ease the impact of the Covid-19 pandemic. This includes its fleet powerhouse Cessna Grand Caravan, dubbed the Supervan based on a 900-horsepower Garrett engine conversion. which seats nine passengers or holds up 3,000 lbs of freight. The IFR-certified, turbine-engine Grand Caravan, with its exceptional short-field capabilities, can haul 16-foot lumber or up to seven drums into the many off-strip locations Tintina flies.  The slightly smaller Caravan C208 is Tintina’s workhorse carrying eight passengers or up to up to 2,800 pounds of freight, again reaching rough strips it often creates and maintains for clients.

Tintina offers these charter flights to remote locations throughout the Yukon, Northwest Territories, northern British Columbia and Alaska. The team holds an extensive knowledge of bush strip locations and conditions throughout the north based on decades of collective local experience with its core group of bush pilots, who are also owners. They all hold an Airline Transport Pilot’s License, key instrument ratings for the north, and average more than 9,000 hours in a large variety of aircraft.

Long-time pilot Dave Sharp re-discovered his love for bush flying and, with a DHC-2 Beaver on wheels, founded Tintina Air in 2010. By 2015, he began bringing like-minded pilots into the fold.

In 2017, Ian Cosco and Geoff Koots would both invest in Tintina, providing the two young pilots with the opportunity to build an aviation business around their passion for bush flying in Northern Canada. Sharp, who holds more than 15,000 hours in the air, presented a succession plan to Cosco, Koots and long-time bush pilot Freddie Feldman.

Today, the four co-owner pilots, along with director of maintenance, Matt Wolsynuck, are growing Tintina as a unique charter operation in Canada’s north.

“Dave started with the idea that he could go into more aggressive strips [and] that has held true for Tintina,” says Cosco, who recently took on the role of General Manager for the company, while continuing to serve as its Approved Check Pilot. “We go into some strips some other companies won’t, because we have the experience and different safety measures.”

Tintina now has eight aircraft in its fleet and the team is focused on developing a new business model for single-pilot IFR bush flying, in addition to VFR. “We provide both, which keeps us on our toes,” says Cosco. “We do a lot of flying where we’re half IFR, and then you have a scud run through the mountains to get into a strip.”

Cosco, age 33, grew up in a family of pilots flying floatplanes and into the bush. Northern aviation has always been a primary part of his life. After spending nine years as a professional freestyle skier, reaching the World Cup circuit, Cosco earned his Commercial Pilot’s License in 2014 through BCIT’s Flight Operations program.

With the addition of Underwater Egress Training and Wilderness Survival Certificates, Cosco in early 2015 became a First Officer on the Super King Air with Alkan Air out of Whitehorse. He would then go on to fly the BE20 for Carson Air before returning to Whitehorse to join Tintina Air in April 2017.

Now serving as Chief Pilot for Tintina, Koots, age 32, was not born into a flying family but found a natural passion for flight when he started lessons in his last year of high school. He stuck with it, quickly completing a range of pilot ratings. Koots then moved from his small home town just outside of Red Deer, Alberta, to take a ramp job in Fort Simpson, Northwest Territories, with Wolverine Air.

Koots recalls how the job opened up his eyes to the 703-charter world and he returned next summer to fly a Cessna 206 for Wolverine. “It was a great place to learn with a lot of experienced people; and then I had an opportunity to come to Whitehorse,” says Koots. “I jumped at it and I’ve been here ever since.”

Koots began flying for Whitehorse Air Services and then, in the summer of 2012 at Dawson City Airport, met Dave Sharp who was hauling fuel drums out to his Beaver. By next Spring, Koots joined Tintina. 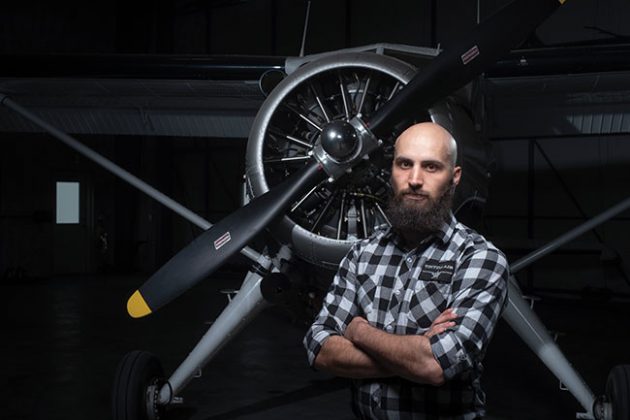 “The work that we do, and our fleet, is what drew me to Tintina Air. When I first started here, we had two Beavers on wheels and that really caught my interest,” says Koots. “There are not too many wheeled Beaver operators in the country… The places we go and the interesting flying we do was definitely a big draw for me to come here.”

Koots is rated to fly all of Tintina’s aircraft, which typically generate 80 to 85 per cent of the company’s annual revenue through the months of July to September. A lot of this flying is done for mining companies that need to access – and have supplies brought into – difficult locations.

Koots estimates around 75 per cent of the company’s revenue comes from the mining and exploration sector, which has helped provide stability for Tintina through the COVID-19 pandemic.

“We were expecting things to be really slow but mining and exploration still continued on, so we had a good year,” says Cosco, noting that the season started later than usual, but, perhaps driven by a spike in the price of gold, really took off before fall. “Once it started, we were flat out for three months.”

Tintina also provides services for hunting and outfitting operations, sightseeing and glacier tours, rafting groups, film crews, government/tourist charters, and everything in between. Because the team was busy with mining and exploration work this season, however, flying into remote locations, they were somewhat separated from witnessing the impact of the pandemic, even as they were aware of other members from the Yukon’s tight-knit aviation community struggling under the weight of COVID-19.

“We have solid relationships with our clientele and as they grow, we will grow with them. I’m really optimistic about the future,” says Cosco. Koots adds that metal prices are still relatively strong and that next year should be a bumper year for exploration in the Yukon, particularly if vaccines are effective. “Drills are already spoken for, projects for next summer, which is pretty rare,” he says.

Tintina was flying into off-strip runways through all of September this year, and into mid-October, dealing with the harsh weather the envelopes the region during the fall – noted by both Koots and Cosco as actually being more difficult to fly in than winter conditions. For its exploration and mining clients, Tintina typically flies for more than an hour into base-camp locations. The team is often busy cutting down sprouting trees on their client’s unpublished strips. “Saplings can do a lot of damage when you’re doing 70 knots,” says Koots.

With a high number of takeoffs and landings in this environment, Tintina’s aircraft take more of a beating than a typical charter operation, making its maintenance capabilities critical. Tintina’s AMO was slower this year, but the benefits of holding a certified maintenance operation has provided great benefits since the company added a 10,000-square-foot hangar in 2018. The investment also increased its overall aviation presence in the region, not to mention how it provided a more hospitable working environment during the Yukon’s long winter months. The AMO team, which just finished painting one of Tintina’s older Navajos, has a full schedule into early 2021.

The AMO operation is led by Wolsynuck with the recent addition of Mitch Sheppard. In addition to being a certified AME, Wolsynuck himself is an experienced GA pilot flying a 1957 Super Cub C-FLRK on wheels and serving as a board director on the Yukon Chapter of COPA. This Chapter, Flight 106, focuses on issues uniquely critical for the region’s general aviation community, such as safety and the maintenance of airport infrastructure and services. Even the smallest airports provide an enormous amount of economic and social impact to the region in terms of employment, emergency services, moving goods and connecting people. Tintina Air’s new core of aviators is adding influence and knowledge to this infrastructure.

“We make sure everyone at Tintina knows we are a team and we all need to work together,” says Cosco. “This has worked out very well for us. We now have a young ambitious crew that is eager to learn and grow together.” | W