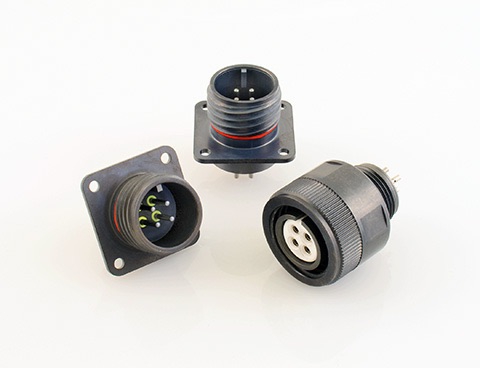 The current generation of hermetically sealed electrical connectors used by the aerospace industry operate reliably in the -65oC to 260oC (-85oF to 500oF) temperature range with a leak rate of 1×10-7 leak rate and an insulation resistance value of 1,000 megaohms at 500 VDC. However, when subjected to higher temperatures not only does the liklihood of a hermetic seal failure increase but the resistance value of the glass insulator also declines. These factors result in significantly limiting the functionality of many instruments and motion control devices in high-temperature environments.

The new HTX connector utilizes a proprietary glass insulation material that was developed by Hermetic Seal Corporation. This technology enables full electrical functionality in the hermetic receptacle welded to a high-temperature instrument or device as well as the cable terminated plug with which it mates.

In addition, the HTX connector series is available in shells and insert arrangements that meet the dimensional requirements of several MIL specifications.

Founded in 1945, Hermetic Seal Corporation was a pioneer in the development of glass-to-metal seal technology. Today, as a unit of AMETEK Interconnect Technologies, Hemetic Seal Corporation is the largest independent producer of hermetically sealed connectors for extreme environments, such as those found in oil and gas, aerospace, medical and other industries.