“Visiting this mysterious ocean world could revolutionize what we know about life in the universe. This cutting-edge mission would have been unthinkable even just a few years ago, but we’re now ready for Dragonfly’s amazing flight.” 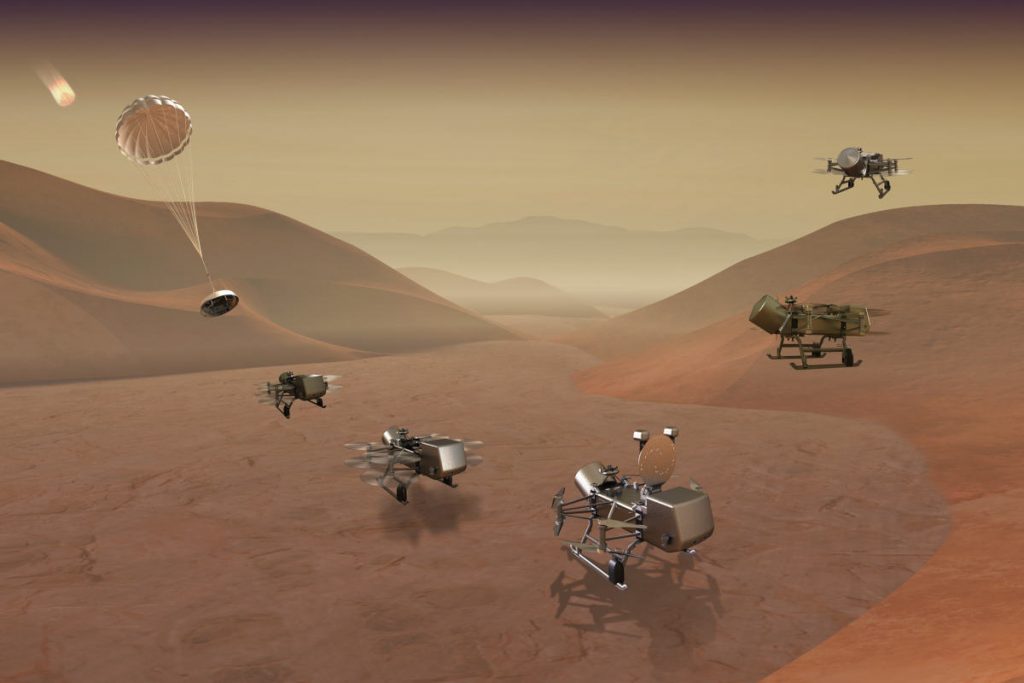 NASA has selected a new mission that will send a helicopter called Dragonfly to Saturn’s moon Titan as part of its New Frontiers program, which aims to set priorities for solar system exploration. New Frontiers already includes the New Horizons mission to Pluto and the Kuiper Belt, Juno to Jupiter, and OSIRIS-REx to the asteroid Bennu.

Dragonfly is expected to launch in 2026 and arrive at Titan in 2034. This marks the agency’s second planned rotorcraft mission, including its Mars Helicopter test vehicle that will be part of the Mars 2020 Rover mission, scheduled to launch in July 2020 – arriving at the Red Plant in February 2021 under the current timeline. The Mars Helicopter, which will be stowed in the belly pan of the Mars Rover, weighs approximately 1.8 kilograms (four pounds) with a fuselage that NASA describes as about the size of a softball.

The Mars Helicopter employs twin, counter-rotating blades rotating at almost 3,000 rpm, described by NASA as a rate that is about 10 times faster than a helicopter on Earth in order to bite into the Martian atmosphere. Dragonfly, however, will be able to take advantage of Titan’s thick atmosphere as the first multi-rotor aircraft to fly on another plant. It is expected to be equipped with eight rotors, allowing it to fly like a large drone, and powered by plutonium-238, a radioactive material – not the type used in nuclear weapons or reactors – that produces alpha particles. Used for NASA’s deep-space exploration vehicles, these ionizing particles, which can be shielded by material as thin as a piece of paper, are used to turn heat into voltage.

The second-largest moon in our solar system, Titan has a nitrogen-based atmosphere like Earth, but it is approximately four times as thick. It’s clouds – and rain – are primarily comprised of methane, as other organics form in Titan’s atmosphere and fall like light snow. This environment leads to complex organics and lakes of liquid hydrocarbon (including a subsurface ocean), energy and water similar to elements that may have sparked life on Earth.

NASA describes Titan as an analogue to the very early Earth, hoping the moon – larger than the planet Mercury – can provide clues to how life may have arisen on our planet. During its 2.7-year baseline mission, NASA explains Dragonfly will explore diverse environments from organic dunes to the floor of an impact crater where liquid water and complex organic materials key to life once existed together for possibly tens of thousands of years.

Dragonfly’s instruments will study how far prebiotic chemistry may have progressed, in addition to investigating its atmospheric, surface, subsurface ocean and liquid reservoirs. As the first vehicle ever to fly its entire science payload to new places for repeatable and targeted access to surface materials, Dragonfly will search for chemical evidence of past or extant life.

“With the Dragonfly mission, NASA will once again do what no one else can do,” said NASA Administrator Jim Bridenstine. “Visiting this mysterious ocean world could revolutionize what we know about life in the universe. This cutting-edge mission would have been unthinkable even just a few years ago, but we’re now ready for Dragonfly’s amazing flight.” 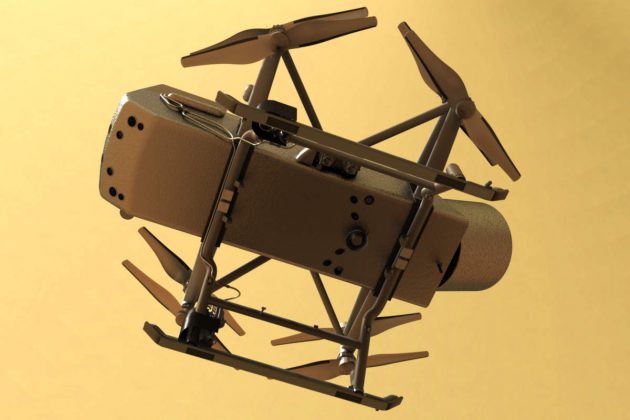 Dragonfly is to be equipped with eight rotors, allowing it to fly like a large drone in Titan’s thick atmosphere. (Illustration:Johns Hopkins APL)

Dragonfly will take advantage of 13 years’ worth of Cassini data – from the historic, now ended Saturn mission (1997 – 2017) – to choose a calm weather period to land, in addition to a safe initial landing site at the equatorial “Shangri-La” dune fields, which NASA describes as terrestrially similar to the linear dunes in Namibia in southern Africa.

Dragonfly will explore this region in short flights, building up to what NASA describes as a series of longer leapfrog flights of up to eight kilometers (five miles), with the ability to take samples from compelling areas along its route. NASA explains, Dragonfly will finally reach the Selk impact crater, where there is evidence of past liquid water, organics – the complex molecules that contain carbon, combined with hydrogen, oxygen, and nitrogen – and energy, which together make up the recipe for life.

“Titan is unlike any other place in the solar system, and Dragonfly is like no other mission,” said Thomas Zurbuchen, NASA’s associate administrator for science. “It’s remarkable to think of this rotorcraft flying miles and miles across the organic sand dunes of Saturn’s largest moon, exploring the processes that shape this extraordinary environment. Dragonfly will visit a world filled with a wide variety of organic compounds, which are the building blocks of life and could teach us about the origin of life itself.”


Related
Out of this world rotorcraft
Introducing a concept vehicle for ferrying tourists on moon missions
Mars Helicopter completes flight tests for 2020 launch
A Canadian on the moon? Ambitious plan could make it happen