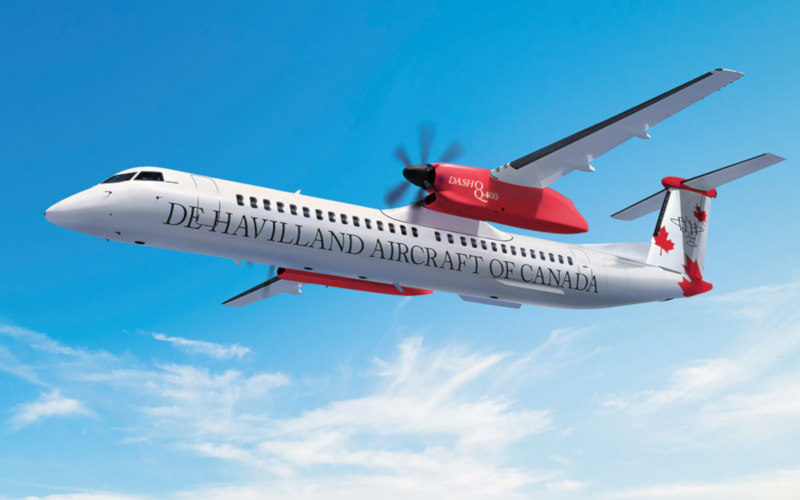 De Havilland Aircraft of Canada Limited, today during the Dubai Airshow, announced that lessor Palma Holding Limited signed a Letter of Intent to purchase 20 Dash 8-400 aircraft. The parties are working to finalize a purchase agreement.

The Dash 8-400 aircraft is the newest turboprop aircraft of the Dash 8 Series family. De Havilland notes it is the only turboprop in its class certified for high-altitude airports, stating the aircraft delivers 30 per cent less fuel burn than competing jets, while cruising 160 km/h faster than conventional turboprops. De Havilland also points to the Dash 8 Series leveraging large propellers that operate at a lower RPM, while generating more power with less noise – making it a friendly option for city centres.

As the most successful Dash 8 Series aircraft, the Dash 8-400 has logged almost seven million flight hours with more than 60 owners and operators in almost 40 countries. De Havilland states the aircraft holds a dispatch reliability rate of over 99.5 per cent. It has transported more than 400 million passengers worldwide.

“The Dash 8-400 aircraft has been proving itself in the Middle East and Africa for quite some time and we feel that we are on the brink of even greater success as we continue to work with lessors such as Palma to support the development of the region’s air transportation networks,” said Todd Young, COO, De Havilland Canada.

Young continues to state that the Dash 8-400 has the largest passenger capacity of any turboprop in production today and offers significant, proven versatility – from missionized operations such as firefighting, cargo-combi operations with 50-seat aircraft, dual-class service, and Low Cost Carrier operations with the 90-seat variant. “All of these applications can be deployed in the diverse operational environment across the Middle East and Africa,” said Young.