News
Taking to the air

Most of us are familiar with the Goodyear blimp or MetLife blimp which cover major sporting events south of the border. Here in Canada, we don’t see or hear much about blimps or airships as they are often called. But at least two companies are planning to build airships aimed at northern communities and the mining and oil and gas sectors. 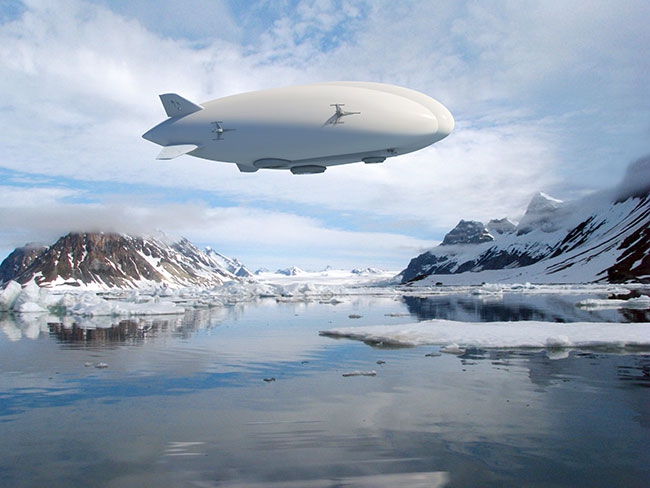 Lockheed Martin and LTA Aerostructures are investing in large airships that will work in the mining and other natural resource industries in the far north. Most of us are familiar with the Goodyear blimp or MetLife blimp

One is LTA Aerostructures based out of Mirabel, Que., which is majority owned by U.S. parent company LTA Corporation. The other is Lockheed Martin, which plans to deliver its first $40 million airships to Hybrid Enterprises in 2019, its exclusive reseller, who will then hand them over to U.K.-based Straightline Aviation which will operate them on behalf of Quest Rare Minerals, a Montreal-based mining exploration company.

The use of airships in transportation provides a cost-effective alternative in cases where the delivery of materials presents major logistical challenges, according to LTA which plans to invest $90 million over three years and create 180 new jobs. This form of transportation reduces the need to build often intrusive and ecologically harmful infrastructures. The technology can be used in remote and inaccessible areas without altering the natural ecosystem. LTA holds a broad portfolio of airship patents. The first prototype designed by the company had its maiden flight in 2009.

“Canada in general and Quebec in particular represent a major market for transportation by airships in remote northern areas where there is an abundance of natural resources,” said Michael Dyment, chairman and CEO of LTA. “We have received superb support and encouragement from the aerospace community and from local authorities. We are eagerly looking forward to collaborating with numerous Quebec companies.”

The Conference Board of Canada forecasts that Canada’s overall northern metal and non-metallic mineral output will grow by 91 per cent from 2011 to 2020. The annual gross domestic product of mining in the north, which was $4.4 billion in 2011, is expected to reach $8.5 billion in 2020. But the lack of transportation, energy and communities’ infrastructure is the biggest obstacle to northern mining development, the board added.

LTA is developing two models of airships, a 10-tonne and 70-tonne airship in partnership with several major aerospace companies, including Stelia North America (Airbus), Honeywell, Esterline CMC and Zeppelin Luftschifftechnik GmbH, among others. The smaller model is 80 metres long by 40 metres wide and can travel up to 130 km/h with a range of 1,287 km. The 70-tonne model measures 152 metres by 76 metres and can also travel up to 130 km/h at a range of 4,074 km.

The smaller model is aimed at northern transportation and logistics, governments and first nation logistics and mining, oil and gas exploration logistics. The larger model is designed for northern mining production and extraction, construction, wind farms and power plant construction. On return trips, airships will remove decades of trash for recycling and take Arctic products such as fish and other locally produced items to southern markets.

A new $60-million manufacturing facility is planned for construction at Mirabel this year. Upon completion, each airship will be sold to a third party aviation leasing company who will then lease it back to LTA Flight Operations. Airship capacity will be sold on an hourly, weekly, monthly or yearly basis, depending on a customer’s requirements.

Airships make a lot of sense in a country where 70 per cent of our land mass has no rail or road access, according to Barry Prentice a professor of supply chain management, at the University of Manitoba.

Sealift is the least expensive form of transport available to communities with seasonal access to open water, Prentice explained to Wings. But seasonal service also means that if cargo misses the sailing date, a construction project or other projects could be delayed for a year or forced to use more expensive air transport. Airships could fill in when seasonal service comes to an end. They could also provide a feeder service for Mackenzie River barges, for example, by transporting pipes, equipment, fuel and supplies from barges to mining sites and haul mineral concentrates back to the barges.

The construction of all-weather gravel roads is even more challenging, given the expense in areas of muskeg, permafrost and several water crossings. On average, these roads cost about $3 million per kilometre, excluding maintenance and snow clearing.

“At that price, it would cost $15 billion just to convert the 5,000 km ice-road networks of Ontario and Manitoba into one-lane gravel roads,” Prentice said. “Compared to the cost of converting ice roads to gravel, airships would be an inexpensive means to expand service to remote communities and resource development. For the cost of building about 300 km of gravel roads, a transport airship industry could be established that would serve the entire north of Canada.”

But in 2006, an El Ñino year, the ice road serving diamond mines in Yellowknife closed early and the expense to fly in fuel and supplies added $100 million to the cost of the mines’ operations.

While air transport is the only year-round transportation available, shipments can be expensive and limited to cargo size. And only specially kitted jet aircraft can operate from gravel runways, which may be too soft to land on during spring, Prentice pointed out.

“Airplanes can easily ‘cube out’ before they ‘weigh out’ if the cargo is low density items like bread, corn flakes, diapers, paper towels etc.,” he said. “Transport airships could reduce the transportation costs of food and general merchandise to remote communities by a third.”

That is great news for people like Guy Freedman, president and senior partner, First Peoples Group, an indigenous consulting firm who notes the cost of shipping drives up the price of food and materials to being unaffordable in many cases. For example, online auctions for six cans of Coke in Nunavut can
reach $80.

“LTA’s new generation of cargo airships will significantly lower food prices, clean up landfills and make housing a reality,” he said. “It will open up access to economic opportunities in sectors such as mining, oil and gas.”

In the case of mining company Quest Rare Minerals of Montreal, it plans to use a fleet of seven Lockheed Martin airships, each costing about $40 million, to transport personnel and supplies to its Strange Lake mine on the Quebec-Labrador border, 1,100 km northeast of Quebec City. Once the mine is operational, it will use the airships to carry more than 200,000 tons of rare earth ore concentrate annually to its Bécancour refining facilities near Trois-Rivières.

The agreement with Quest is valued at about US$850 million, including fuel costs, over a 10-year period that is slated to start in 2019, with further extensions of up to 20 additional years in line with the current projected life of the mine.

“We are looking forward to working with Quest and believe that our Hybrid Airships will provide significant benefits in reaching remote locations such as the Strange Lake complex. Removing the need for expensive, intrusive infrastructure, it is a significant step in re-defining the way transport works in remote regions,” said Mike Kendrick, CEO of operator Straightline Aviation.

“I believe this hybrid technology will change Canada’s north by giving us reliable year-round transportation, to bring global access to the people who live there and finally connect it to the rest of Canada,” added Grant Cool, COO of Hybrid Enterprises.

The first version of the airship will be 91 metres long and be able to transport up to 20 tons of cargo and 19 passengers, but later versions could carry up to 50 tons. Using a combination of helium and aerodynamics, the airships will burn less than one-tenth the fuel of a helicopter per ton and cost approximately one-quarter of what it takes to operate a fixed-wing cargo aircraft, according to reseller Hybrid Enterprises.

The airships will not only help Quest develop its Strange Lake mine without having to wait for roads and rail lines to be built but it will also be better for the environment, added Quest chairman Pierre Lortie.

“We avoid having to build an intrusive land-based infrastructure, either across Labrador or Quebec and therefore contribute to sustainable development,” added Lortie, who has held several senior executive positions at Bombardier, including president of Bombardier Aerospace, Regional Aircraft.

The lack of infrastructure in the north has long been considered a barrier to economic development in the region. Both the Quebec and Ontario governments have recognized this challenge and have committed a combined $3 billion for infrastructure development for their respective Plan Nord and Ring of Fire resource initiatives.

The question now remains as to whether the private sector, including resource and mining companies, will embrace this not-so-new technology by leasing airships to tap into the north’s unlimited potential.