The Airbus A380 is entering the certification phase with airline services scheduled to begin in mid-2006. The bigger challenge will be market acceptance. 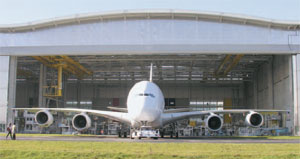 There has not been so much excitement swirling around a commercial
jetliner since Concorde entered service in 1976. Conversely, it has
been 35 years and the arrival of the Boeing 747 since the airlines have
had so much space to put a distinct signature on their cabins and
in-flight product. Virgin president and CEO Richard Branson said the
A380 will showcase his vision of the future of flight when the
airline’s first aircraft enters service in the spring of 2008.

In
a standard 530- passenger first class, business class and economy
configuration, the A380 has 35 per cent more seating capacity than a
Boeing 747, but 50 per cent more space. Since the world’s largest
passenger airplane first lifted off the drawing board, the sky has been
the limit on how to fill it. Outrageous schemes such as swimming pools,
bowling alleys and barber shops (was there ever a market to have
service people circling your head with sharp instruments in
mid-flight?) have given way to unconventional but more realistic
amenities.

For the first few years at least, passengers onboard
the double-decked behemoth are going to be exposed to all bells and
whistles including improved leg room even in economy, bars and lounges
in all three classes, at least one duty free shop and (on Virgin) a
casino and gymnasium. But how long before some of those cruise
shipstyle luxuries are tossed overboard for more revenue paying
passengers? That was certainly the case with the early Boeing 747 not
too long after it entered service.

So it will be with the A380,
which can transport up to 840 passengers in a single-class high-density
configuration. Indeed, for Sir Richard’s vision of the future of air
transport to unfold, airlines operating the A380 will watch passengers’
movements closely; removing amenities that are not used with seats that
pay. Still, the success of the A380 will not hinge on whether a
passenger can work up a sweat or play a few games of blackjack en
route. The success of the A380 will be volume. And here, it appears
that Airbus has dealt a winning hand. The European manufacturer is
betting that the same market trends that shaped the Boeing 747 in the
1960s – limited runway slots and increases in travel – still exist. It
is a good call. Especially in Asia with its large and concentrated
population centres, propensity for air travel and the gradual
liberalization of domestic and international markets.

Even with
a shift in travel patterns away from hub-andspoke in favour of
point-topoint, there are sufficient city pairs busy enough to support a
new era of even bigger widebody airplanes. Britain’s BAA plc thinks so.
The privatesector airport authority that runs London Heathrow, expected
to be the first airport to receive the A380 when launch customer
Singapore Airlines begins service next year, estimates that by 2016 one
out of every nine aircraft landing at the airport will be an A380.
(Heathrow, which will handle aircraft from six customers plans to have
14 A380 stands by 2011.)

For its part, rival Boeing does not
dispute that demand for a very large airliner exists, just the extent
of it. Airbus sees a market for upwards of 1,600 A380-type aircraft
over the next 20 years, but Boeing, which for now owns the category
with its popular but increasingly long-in-thetooth 747, pegs the number
at closer to 400. More than enough for Airbus to realize a profit if
calculations that ship number 250 represents the break-even point for
its US$15-billion investment and the A380 remains the only game in town.

The
last point is far from certain, particularly if Airbus experiences a
surge in orders from traditional Boeing 747 customers such as British
Airways, which is about to go head-to-head with A380 customers on many
of its most profitable routes to the Middle East, Asia and Australia.
Los Angeles-based International Lease Finance Corporation (ILFC), the
largest lessor of new and widebody aircraft in the world, figures that
two of its six A380s will be operating in China in time for the 2008
Olympics.

The smart money was apparently on Airbus cracking the
Chinese market by Easter. In fact that day came in January when China
Southern Airlines became the A380s 15th customer with an order for five
aircraft.

Boeing has a stretched version of the 747-400 in its
back pocket. The arrival of the 737-800 has demonstrated that no
aircraft manufacturer can extend the life of an airplane better than
Boeing. Nevertheless, Seattle is going to have to cough up a design
that offers something other than more seats to match the A380’s
efficiency, which some analysts say is 15 to 20% better per
passenger-kilometre than the 747.

The ILFC order for six
aircraft notwithstanding, no North American airline has bought a
passenger version of the A380, although FedEx and UPS have each ordered
10 of the freighter. An order from Air Canada, which recently disposed
of its fleet of Boeing 747-400s, is unlikely.

But if Airbus
executives are concerned over the aircraft’s lack of penetration in
North America, they are not showing it. And why would they? The US
airline industry may have given rise to the Boeing 747, but its
enormous success is largely linked to Europe and Asia, with most early
US carriers shedding their Boeings in favour of smaller DC10 and L1011
tri-jets quite early in the game. Only two airlines, United (which
continues to operate under Chapter 11 bankruptcy protection) and
Northwest continue to operate the 747.

It would also be
shortsighted to build a fence around the A380 as strictly a long-haul
airliner. Airbus is not ruling out a short-range version for
high-density inter-city routes within Asia. But for now, the focus is
on the long haul. The rollout is over and the business begins with a
maiden flight expected before April (the aircraft is certain to be a
showstopper at this year’s Paris Air Show).

Airbus forecasts
that 60 airports will be handling the A380 by 2010, including Toronto
and Montreal. Of the two, Montreal is likely to be first out of the
chute given that Air France’s service to Paris is the heaviest Canadian
route among existing A380 customers. Both airports will be ready to
welcome the A380 when it arrives. Good thing, because aligning the
ground product with even the most basic A380 in-flight amenities may
turn out to be the customer airlines and Airbus’s most immediate
challenge.

Airbus estimates that A380 modifications (increasing
runway and taxi-strip shoulders, enlarged baggage carousels and
twin-level bridges for boarding and offloading) will represent a narrow
percentage of total airport capital expenditures. That figure seems to
be borne out by New York JFK’s US$10-billion master plan, where only
US$100 million is directly linked to A380 modification costs. The
offset is a 35% increase in passenger volume every time a flight
arrives full. That has not prevented Airbus from having to light a
friendly fire under at least two US airports (LAX rumoured to be one),
suggesting that Sir Richard’s vision might have to begin from the
ground up.

With an order book that has reached 154 A380s
(including 24 of the freighter version), Airbus expects to build four
aircraft a month at its Toulouse facility. The manufacturer also has
options for an additional 64 aircraft including 20 freighters. The
largest order to date is for an eye-popping 43 aircraft from Emirates
based in Dubai, part of a large scale plan to turn the oil dry region
into a global resort and international air transport crossroads.
Emirates will not take delivery of its first A380 until October 2006,
although the airline has already mused that it could do with the
airplane now.

Even more than the Boeing 747, the Airbus A380 is
going to propel long-haul (and to a lesser extent, shorthaul over
extreme highdensity city pairs) commercial aviation into a series of
unknowns. Pan Am’s order for 25 747s created a domino effect where most
of the world’s major airlines rushed to the purchase window to secure
their own delivery positions. The A380 is unlikely to trigger a similar
stampede. But given the current economic climate, can A380 customers
wait out the novelty of flying in an airborne cruise ship?

Conversely,
customer airlines flying a US$285- million airplane that needs bums in
at least 335 seats to turn a profit are going to have to quickly learn
the balance between revenue and amenity. What is clear is that Airbus
is about to usher in a new age of experimentation on the ground and in
the air, and it has provided a magnificent canvas to work from.


Related
French newspaper says courier UPS may cancel its order for Airbus A380
Who’s On First?
Ten years in the skies: A380 numbers add up
Biggest Boeing plane ever takes to the sky