We have a potential boon for the Canadian aerospace industry. 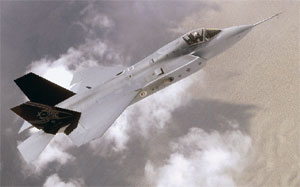 Shortly after the din of the recent federal election had subsided there
were discussions between Canadian military fighter aircraft experts and
the US with regard to the production of the F-35, also known as the
Joint Strike Fighter. This multi-purpose stealthy fighter aircraft has
been designed for the US Air Force, Navy and Marine Corps as well as
British RAF and Navy, and was first rolled out on Feb. 19, 2006.
Currently, planned production figures will likely exceed 2,000 and,
unless another more suitable plane comes on the horizon, the F-35A may
well be chosen to replace the current Canadian Forces F-18s when they
run out of airframe time, which is expected to be sometime in the next
decade.

This
seems not to be of much interest either to Canadian taxpayers or to
businesses. It should be, for if the F-35 is chosen by Ottawa, it could
well be the most expensive project ever undertaken by the Department of
National Defence. Even if it is not, production of this aircraft could
be a boon to some of our aerospace companies.

At the time of the
Second World War, the Hurricanes and Spitfires used in the Battle of
Britain cost in the vicinity of $25,000. The price for fighter aircraft
has risen exponentially since then to the point where a new jet fighter
aircraft could set the government back some $50 million or more. Nor
are they cheap to operate once they come into service! It is hard to
establish an exact price for the F-35, given that figures from $60
million up to $100 million per unit have been widely quoted. It is not
yet clear what exactly can be obtained for this unit price, and it is
no secret that cost overruns are normally associated with the
development of any military aircraft. It is, therefore, highly likely
that the end amount will be much closer to the latter figure.

What
makes such aircraft so expensive for the taxpayer? From the F-35’s
point of view, just about everything. This is a multi-purpose aircraft;
the same basic airframe has to be suitable for a number of duties, not
all of which are compatible. The British and US Marine Corps, wedded as
they are to the use of STOL technology, want a version along the lines
of the current Harrier jet both are using, and which will be known as
the F-35B. Such planes can land on the proverbial postage stamp, be the
stamp on land or on an aircraft carrier. They require more than one
adjustable tailpipe and such tailpipes are all adjustable downward
instead of horizontally.

This leads to the engine. As commercial
airlines have already demonstrated, jet engines have become much more
reliable. Witness the routine use of twin-engine planes to fly the
oceans rather than the three- or four engined aircraft of earlier
times. But they have also become that much more expensive to produce;
hundreds of millions, if not billions, of dollars go into the creation
of any new jet power plant.

Finally, and most expensively, there
are the electronics. Guided only by still relatively new ground control
procedures, a Spitfire or Hurricane pilot during the Battle of Britain
used his eyes to find the enemy; today radar does the job and air-toair
rockets can be fired with considerable accuracy at aircraft that are so
far away they can be seen only on the pilot’s radar.

The here
and now is that any advanced multi-purpose military aircraft will cost
megabucks; this can be mitigated to a degree only by a larger
production run. For this reason Canada is not the only NATO country
that has invested in the F-35 project. Turkey, Britain, Denmark,
Holland, Italy and Norway are other member nations contributing
financially to the development of the aircraft. Canada was, however,
after Britain, the next country to sign on to the project. Ottawa will
get, should it decide to buy, a state-of-the-art fighter aircraft that
will last for decades. Given the rapid development of UAVs or Unmanned
Aircraft Vehicles, the F-35 could well be the last of the expensive
manned fighters.

Also involved financially is one non-NATO
country – Australia. Interestingly enough, the Aussies share with
Canadians utilization of the same aircraft – the F-18 – to be replaced.
The others, except for Britain, have aging F-16s to think about.

Because
of its larger requirement and its longstanding interest in STOL
technology, Britain was the first country to put up money in the F-35
project – no less than US$2 billion. Over a year went by before the
next country signed up; this was Canada, with its much more modest
US$150 million. After that, the project went through the sound barrier
and the other countries joined in short order.

One reason for
this plethora of supporters of F- 35 production could well be that the
US may at present be the only country financially capable of producing
the next generation of fighter aircraft. Sweden, a country renowned for
its excellent military jets over the past half century, has decided
that its current Saab Gripen, which has been bought to date by South
Africa, Hungary and the Czech Republic, will be the last of the Saabs.

France
has had absolutely no luck to date in marketing its fine aircraft, the
Rafale, currently used by the French Armée de l’Air and Navy. The
European Eurofighter, ordered by Britain, Germany, Italy, Spain,
Austria and just recently Saudi Arabia, does not have a successor on
the drawing boards. While the Eurofighter is also a multipurpose
fighter, it was initially planned as a point defence aircraft. With the
arrival of the F-35 in the British armory, it could be assigned that
task, leaving the other duties to the F-35. Other NATO countries,
including Canada, cannot afford the luxury of having two distinct
aircraft.

On the other side of the military fence as a possible
threat to the F-35, the Russian Sukhoi 27-37 series has resulted in
excellent aircraft capable of further development – but Moscow is
woefully short of money for development of this or any other aircraft.
It could well be that Moscow’s main task will be to see how far it can
stretch the Sukhoi design to keep pace.

The only other potential
rival is China, but again Beijing has had to content itself to date
with buying Russian technology and aircraft, including the Sukhoi 30.
Its industry is capable of turning out excellent versions of Russian
aircraft but the jury is still out as to its capability of designing
and producing one in the same class as the F-35.

India, the
other major power in the area, has tried its hand at designing military
jets but without too much success. It has therefore contented itself
with buying a mixture of Russian and western – British and French –
aircraft. Given its current closer rapport with Washington, it could
well get in line for the F-35. Its navy already employs the Harrier.

Back
in Canada, our fighters are a mixture of the F-18 A/B, the earliest
production run of the aircraft. The Americans are now in the process of
putting into service the latest version, the F- 18E/F/G, and these are
scheduled to serve alongside the F-35. Ottawa may decide that this
aircraft rather than the F-35 is more within its military budget. Then
again, there is an outside chance that the choice could be the latest
American interceptor fighter, the F-22 Raptor, the first squadron of
which has just been put into service with the US Air Force. It has,
however, a much shorter production run and may not still be in
production when our F-18s come to the end of their useful lives.

The
$150-million Canadian investment will not go down the drain if Ottawa
does not choose the F-35. Canada not only got in early with financial
help in developing the aircraft, but hi-tech firms in the Canadian
aviation sector have been able to bid successfully on a number of
contracts. It is in our aviation industry that our greatest potential
for development exists.

While a well-known company such as Pratt
& Whitney Canada is involved, other lesser-known Canadian hi-tech
aviation corporations have also enjoyed success in bidding for
contracts Even small size need not be a limitation in the bidding. A
small firm in Trail, BC, Firebird Technologies, with just 16 employees,
was successful in obtaining a contract to provide base materials for
the infrared sensors in the American aircraft. Given the competition
for contracts with this project, this is testimony to the high quality
of the research carried out by Firebird.

The federal government,
after making the initial $150 million investment in development of the
F-35, has not left Canadian aerospace companies to fend totally for
themselves. One company, NGRAIN (Canada) Corp. in Vancouver, has
received a $5- million grant from Technology Partnerships Canada to
help it develop three dimensional software technologies that can be
utilized in the F-35. NGRAIN has already done work for both the
Canadian and the American military as well as for CAE, the well known
and respected producer of flight simulators.

We thus have a
potential boon for the Canadian aerospace industry as well as a
possible replacement for the F-18. The competition in the former area
will be intense since all nine countries want to see as many contracts
as possible come their way. Canada, as the first nation to throw its
hat into the ring after Britain, is in an excellent position to benefit
even more from this action, especially if our country’s subcontractors
are among those chosen when final decisions are made by Washington on
the make-up of the mass-produced version of the F-35. The investment of
$150 million could well be one of the most telling made by the federal
government in our aerospace industry.