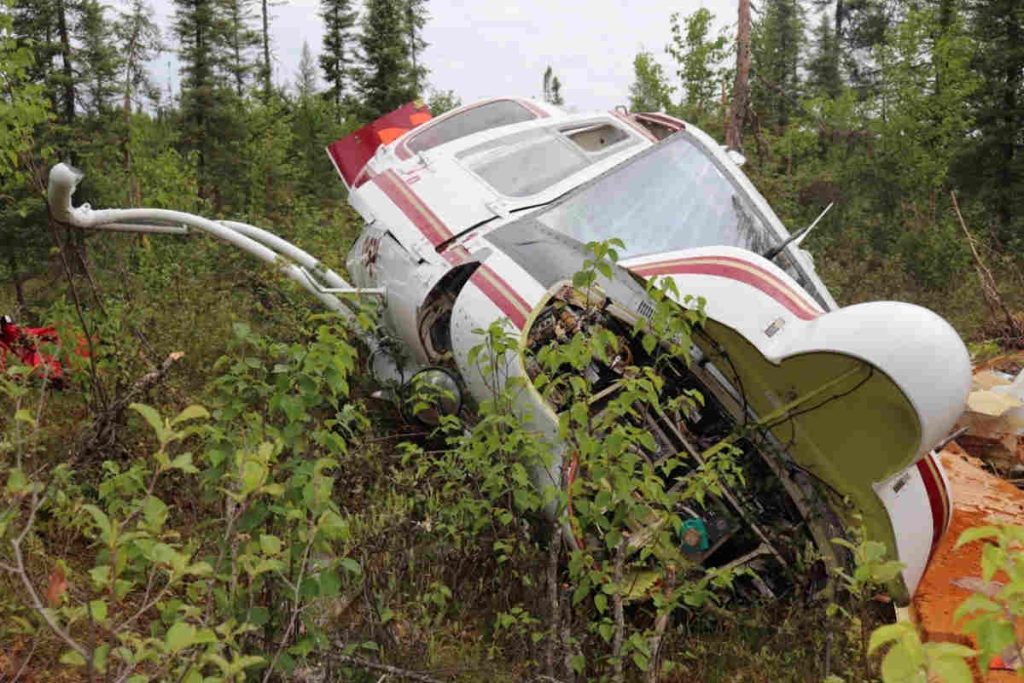 Piloting skills helped the non-fatal outcome of the the June 2021 crash. (Photo: TSB)

The Transportation Safety Board of Canada on Feb. 8 released its investigation report (A21C0052) into the non-fatal loss of control and collision with terrain that occurred on June 7, 2021, near Nipigon, Ontario.

The Transportation Safety Board (TSB) conducted a limited-scope, fact-gathering investigation into this occurrence involving a Helicopter Transport Services Canada Inc. (HTSC) Bell 214ST helicopter (registration C-GDYZ) with only the pilot on board. In releasing its report and concluding safety message, TSB notes, “As seen in this occurrence, the consequences of an incompletely seated retainer ring entering service can lead to a failure of the tail rotor drivetrain and consequent loss of tail rotor thrust.” The full TSB report detailing its look into the maintenance of the aircraft can found on its investigation page.

In describing the accident, TSB explains the experienced pilot, with approximately 8,400 hours total flying time, and around 1,940 hours on the Bell 214ST, suffered serious injuries but survived the crash, which took place at around 7.30 pm EST as he was returning to base from an aerial firefighting mission about 50 km nearest of Nipigon.

TSB explains the aircraft was equipped with a 550-gallon collapsible water bucket on a 150-foot long line and the pilot had conducted approximately 45 drops before informing the fire boss on board the bird dog/spotter aircraft that the helicopter was low on fuel and that the end of his duty day was nearing.

During the return trip to the Nipigon fire base, at about 1,600 feet above ground level (3000 feet above sea level), TSB explains the helicopter was travelling at 70 to 74 knots in a nose-down attitude of roughly 7 degrees due to the empty water bucket when the pilot was alerted by a vibration in the tail rotor pedals and a grinding noise. In its report, TSB explains, moments later, the 42 degree BOX OIL PRESS and 90 degree BOX OIL PRESS annunciators for the two tail rotor gearboxes illuminated, and there was an audible engine overspeed noise. The helicopter yawed to the right, according to TSB’s report, and the nose began to pitch down.

TSB continues to explain in its report that the pilot lowered the collective control and moved the cyclic control aft to counteract the nose-down tendency, increase the main rotor rpm, and enter autorotative flight. As the helicopter began to spin, TSB notes the pilot released the long line and water bucket by kicking the manual cargo release pedal.

The pilot transmitted a Mayday call on the enroute frequency (126.7 MHz) and informed other aircraft working on the same fire that he had lost tail rotor control, according to the TSB report. While the helicopter was descending at approximately 1,000 to 1,500 fpm, TSB explains in its report that the pilot made three attempts to use some engine power to fly the helicopter to a suitable landing area near a small lake.

TSB explains the pilot was able to regain some control over the adverse yaw via airflow acting on the vertical stabilizer and, as the helicopter descended below treetop height, he raised the collective control to cushion the landing, at which point the low rotor rpm horn activated. The helicopter then landed on its left skid gear with almost no forward speed, explains TSB in its report, and the emergency locator transmitter activated automatically and there was no fire. The helicopter was substantially damaged.

TSB explains the pilot shut down the engines and electrical systems, climbed out of the right-side cockpit door, and within a few minutes was rescued by another helicopter with fire fighters on board responded to the Mayday call. He was then transported directly to a hospital in Thunder Bay, Ontario.