News
At the Gate: Keeping up with demand

CAE unveiled its first Pilot and Technician Outlook at the Paris Air Show in June, and the report paints an intriguing look at growth propositions for global airlines. 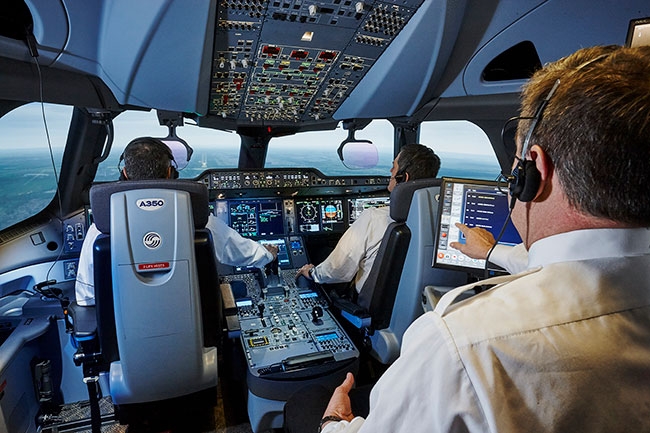 According to the report, airlines around the world will need 255,000 new commercial pilots over the next decade, and a third of those will be required in North America. The report also notes there are about 290,000 commercial pilots working now, but 440,000 will be needed by 2027.

That’s also the last year of Boeing’s 20-year Current Market Outlook (CMO) forecast for jetliner demand. This year marks the halfway point in that forecast which predicted 17,650 single-aisle jets, 6,290 twin-aisle jets and 960 very large jets would be delivered by 2026.

The CAE report notes that 105,000 pilots will be needed just to replace pilots who retire in addition to 150,000 new pilots to meet growing global demand. “Rapid fleet expansion and high pilot retirement rates create a further need to develop 180,000 first officers into new airline captains, more than in any previous decade,” the report concludes.

These numbers mean that more than 50 per cent of the pilots who will fly the world’s commercial aircraft in 10 years have not yet started to train.

Interestingly enough, the report does not mention the word “shortage.” In 2016, approximately 20,000 pilots entered the airline profession around the world and the industry will need to build on that momentum to meet future demand, says CAE president and CEO Marc Parent. There needn’t be a shortage, he maintains, if the airlines and the training industry recognize the future demand and prepare for it now.

CAE is playing its part, working with airlines and regulatory authorities to develop innovative ways to train pilots.

One of those is the Multi-Crew Pilot Licence (MPL) program, launched in 2010 with AirAsia to accelerate 200 cadets into the right-hand seats of narrow-body airliners. “We’ve proven that the cadets are very high calibre as it’s not the flight hours that count, but their competency and we’re seeing increasing demand from various areas of the world,” Parent said.

The first nine AirAsia MPL cadets, who graduated in 2011 and have since been flying as first officers on the airline’s Airbus A320s have since became captains. Since 2010, more than 85 AirAsia cadets have been training through the MPL program.

Earlier this year, India’s Jet Airways and CAE launched a new Commercial Pilot Licence (CPL) cadet pilot training program aimed at creating more than 380 professional pilots over the next five years. The first set of 60 cadets began training in the second half of 2017.

Also with Air Asia, CAE is developing its Next-Generation Training System (NGTS), which builds on years of training advances with innovative data-collection and analysis techniques that measure and rate the skill performance of the pilot.

“This Next Generation Training System is the stepping-stone to reaching a new level in pilot training efficiency,” AirAsia CEO Tony Fernandes said. The NGTS is in beta-phase testing with several other airlines, and CAE hopes to formally launch it later this year.

NGTS will help airlines promote younger pilots to captain with training based on competency rather than flight hours.

In addition to its civil and military training activities, CAE sold 50 full flight simulators last year, recording eight per cent growth with revenues of US$2.7 billion.

CAE maintains Asia will continue to be a hot spot, with new routes to accommodate a growing middle class, particularly in India and China.

In all, the company says 70 new pilots will have to be trained daily globally to meet the demand, which the International Air Transport Association (IATA) projects will grow be 4.2 per cent annually until 2027.

Last year, 20,000 new pilots were trained by the industry at airline-focused flight academies, universities, military and small regional flight schools. That is expected to increase to 25,000 per year by 2027, with a growing percentage coming from academies, CAE said.