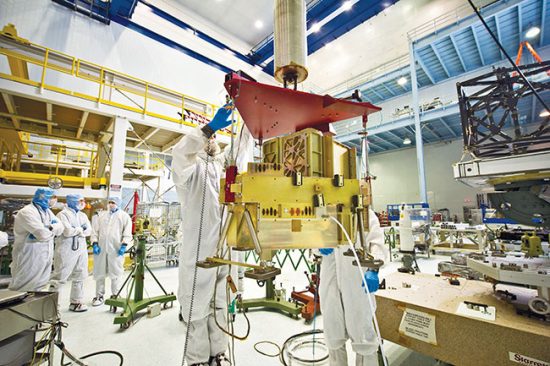 LONGUEUIL, Que. — NASA’s James Webb Space Telescope, outfitted with two Canadian-built systems that help capture images, is already astounding the scientists who worked for years to get the instrument operational.

The United States space agency released on Tuesday four new stunning images taken by the telescope, including of a cloud of gas surrounding a dying star and of the edge of a young star-forming region about 7,600 light-years away. A day earlier, the White House released the first image taken by the telescope: a deep-field photo of galaxies more than 13 billion years old.

“I’m a scientist and I’ve been working on this project for 20 years… several times in the past six months, I’ve nearly broken my jaw with what I saw — these incredible images,” said Rene Doyon, a physics professor at Universite de Montreal and the person in charge of the Canadian-made tools on the telescope.

“I think our fellow scientists will feel the same thing when they look at the data. These data are just amazing. I think it’s fair to say today we’re turning the page — I know its cliche but it’s true — on several new chapters on exoplanet atmosphere, the early universe, star formation, and we don’t know what we’re going to find; it’s exciting.”

The five images released by NASA are the first since the telescope — a US$10-billion joint partnership with the Canadian and European space agencies — was launched in late December 2021.

The Webb telescope is equipped with two crucial Canadian-built systems that are key to its success. They include a Fine Guidance Sensor, which helps aim the telescope, and the Near-Infrared Imager and Slitless Spectrograph, which helps analyze light. Both Canadian instruments are working properly.

The successor to the Hubble Space Telescope, the Webb is deployed much farther out — about 1.6 million kilometres from Earth. The orbiting infrared observatory is 100 times more powerful than its predecessor launched in 1990.

“We’re opening up a new window on the universe and an incredible tool to do it,” Ouellette said at the Canadian Space Agency, which held an event Tuesday for the launch. “In such a small amount of time — really a fraction of the time it would’ve taken for Hubble to take images like this — we already see so much more detail, so much more structure, many more galaxies.”

Ouellette said the images astounded her. “We were expecting something good but there’s just a gut punch when you see the actual image that you can’t predict, and I really feel that emotional response to seeing them.”

One discovery so far from the telescope is the presence of water molecules in the atmosphere of WASP-96 b, an exoplanet — a planet outside the solar system — in orbit around a sun-like star located roughly 1,150 light-years from Earth.

The exoplanet atmosphere had been studied using Hubble, but there were no signs of haze or clouds in the atmosphere, Ouellette said. Webb’s infrared capabilities, however, show the same planet in a different light.

“We have never been able to look at the chemical structure of a galaxy that is over 13 billion years old and we’re able to do that with just the first image of the deep field with Webb,” she said. “We already know things we didn’t know just two weeks ago, so who knows what we’ll know in two months or two years.”

Among the stunning images released Tuesday included the Southern Ring Nebula, about 2,500 light-years away, which is a cloud of gas surrounding a dying star. Another shows the edge of a young star-forming region in the Carina Nebula, about 7,600 light-years away. There’s also an image of Stephan’s Quintet, a visual grouping of five galaxies, first discovered about 225 years ago.

NASA’s James Webb Space Telescope has revealed details of the Southern Ring planetary nebula that were previously hidden from astronomers. Planetary nebulae are the shells of gas and dust ejected from dying stars. This side-by-side comparison shows observations of the Southern Ring Nebula in near-infrared light, at left via NIRCam, and mid-infrared light, at right via MIRI, from NASA’s Webb Telescope. (Image: NASA, ESA, CSA, STScI)

Sarah Gallagher, science adviser to the Canadian Space Agency president, said that Tuesday was an emotional day because the telescope had been more than two decades in the making. “Everyone talks about how emotional they get, and it’s because it all worked so beautifully,” Gallagher said.

“It was so hard, and just the fact that all of these people working together around the world were able to make something so beautiful, so precise, so functional, and it’s delivering exactly or even better than promised.”

Neil Rowlands, engineering fellow at Honeywell Aerospace was involved in the development of both Canadian-made instruments. He was present at Goddard Space Flight Center in Maryland when the Canadian contributions were first turned on.

“It worked out of the box; I guess it’s a testament to all the rehearsals and testing done on the ground,” Rowlands said.

Next, scientific operations will begin with scientists all over the world getting a chance to use Webb. The schedule for the first year is already booked and will include 14-Canadian led projects and 72 others with Canadian co-leads.

“We’ve got years and years to go of great scientific discoveries,” Ouellette said.