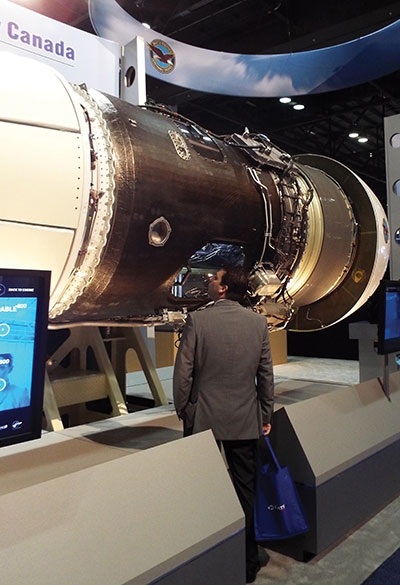 “OEMs continue to push the envelope by seamlessly marrying technological prowess with copious amounts of elegance and style.” The annual NBAA business expo south of the border is the largest business aviation show in the world and represents the apex of everything that’s great in the world of aviation and aerospace.

The annual NBAA business expo south of the border is the largest business aviation show in the world and represents the apex of everything that’s great in the world of aviation and aerospace.

With more than 1,100 global exhibitors showcasing the latest advancements in aviation innovation and technology – and more than 26,000 industry stakeholders and attendees – this year’s event at the Orange County Convention Center in Orlando, Fla. Oct 21-23, featured everything from the latest power plants and avionics, state-of-the art cabin management systems, maintenance and fuel management tools, financial fleet management products and so much more.

And while the main exhibit hall was certainly impressive, this year’s static display, including state-of-the-art BizAv jets from HondaJet, Embraer, Gulfstream, Bombardier, Cessna, Dassault Falcon and more, helped underscore the point that global OEMs continue to push the envelope by seamlessly marrying technological prowess with copious amounts of elegance and style.

After several years of somewhat stagnant global market conditions, there’s also plenty of good news on the horizon for business aviation stakeholders. Market surveys released at the show reveal steady growth in the BizAv industry, more favourable conditions trending back towards the vibrant outlook the industry experienced prior to the 2008 financial crisis.

For example, in its 23rd annual Global BizAv Outlook, Honeywell predicts a steady annual overall industry-wide growth over the next decade. The report notes 9,450 new business jet deliveries worth some $280 billion from 2014 to 2024, a seven to eight per cent increase over the 2013 report.

Larger-cabin aircraft with robust ranges continue to drive market demand, with some 75 per cent of all expenditures targeted at this market segment. The North American market remains a mainstay, with nearly 60 per cent of the projected global demand over the next five years. Europe (18 per cent), Latin America (17 per cent), Asia Pacific (three per cent) and the Middle East and Africa (three per cent) round out the top five.

Honeywell’s forecast dovetails nicely with Avinode’s annual look into BizAv’s charter demand. Avinode predicts the recovery in the North American charter market will continue in 2015 with a three per cent increase in flights versus 2014. The survey also shows Europe will experience modest growth, while tensions in some BRIC countries will
certainly adversely affect charter traffic.

Pratt & Whitney Canada was definitely one of the darlings of this year’s show, making a big splash with its PW800 engine, the power plant of choice for the new Gulfstream G500/G600 family. The decision to go with Pratt & Whitney Canada represents a significant strategic shift for Gulfstream, which had previously gone with Rolls Royce for its power plants, a definite coup for the Montreal-based OEM.

Yes, digesting the enormity and ingenuity on display at the annual NBAA show can be overwhelming. But if you truly love aviation – and admire innovation and ingenuity in Canadian aerospace and how it plays out on a global scale – it’s a magical place to be.