News
Seeking to break out

Did Bombardier hand more than half its C Series airliner over to Airbus for “zero dollars down” or is 50.01 per cent of the estimated $6.1 billion program the opening price to secure Airbus’ expertise for lowering per unit production costs, installing a global support network and getting a lot more of those units sold? (The bonus is skillfully sidestepping the threat of crippling U.S. countervailing duties, which if imposed would jack the cost of each airplane exported to American carriers by up to 300 per cent). 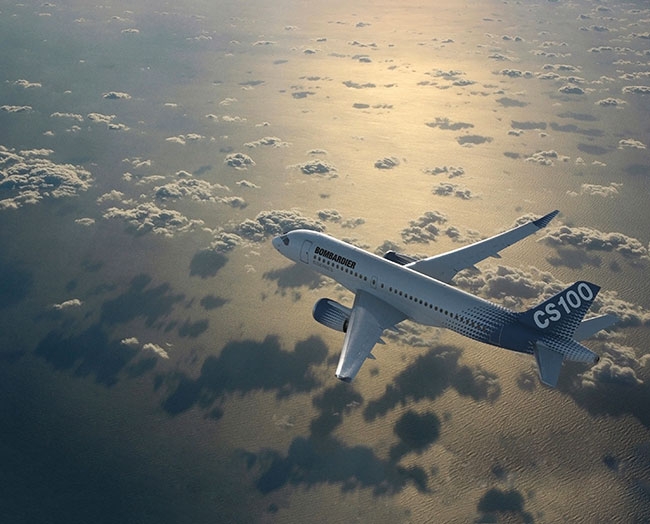 Bombardier's deal to have Airbus assemble the C Series may be helping the aircraft lift off at last.

On the surface, the gambit is already paying dividends. Since the deal was struck in October, Bombardier has announced the sale of 42 C Series jets to EgyptAir and an unidentified European carrier, with options for an additional 42 aircraft. Clearly, these orders would have been in the pipeline for some time, although it is not unreasonable to suggest that the tie up with Airbus gave the customers the comfort level they needed to place the order.

“It takes time to close a deal,” John Di Bert, Bombardier’s chief financial officer said in an analyst call. “The customer needs to be ready to place orders. It is clear that Airbus coming into the program is adding confidence about the long-term success of the C Series.”

Perhaps more pressing: what does transferring a majority stake in the Canadian aerospace industry’s flagship program to a European competitor mean to the future of aircraft design and manufacturing in this country? As it stands, assembly of part or all of the breakthrough Delta order will be shipped to Alabama, where Airbus already assembles A320s for the U.S. Bombardier estimates it will cost US$300 million to build a C Series production line alongside the A320, an investment that Boeing says does not add up. “Bombardier and Airbus are extremely unlikely ever to actually establish a C Series assembly line in Alabama,” Boeing noted in a letter to the U.S. Commerce Secretary.

Bombardier’s C Series program should breakout in 2018. After a smooth entry-into-service, the C Series is getting rave reviews from launch customer airlines Swiss (CS100) and AirBaltic (CS300), production is expected to ramp up to 30 aircraft this year after supplier problems with the engine slowed down the Mirabel assembly line in 2017, and the unparalleled Global 7000 ultra-long-range, large-cabin business jet will enter service in the second half of the year.

As it did with the C Series, the Global 7000 pushes Bombardier closer to its larger rivals with an aircraft comparable to the business jet versions of the Boeing 737 and Airbus A319. At 33.9 metres nose to tail, the 7000 is the largest purpose built business jet in the industry and is expected to fly unchallenged until at least 2020. “We already have the best product lines out there,” Alain Bellemare, Bombardier’s chief executive said. “When we add the Global 7000, we will have the best business franchise in the world. Customers are clearly beginning to realize how game changing the Global 7000 will be.” The 7000 production line is sold out until 2021.

Bombardier is positioned to make inroads into the 100- to 150-seat market. “Airlines are shifting their primary metric for network and fleet optimization strategies from “cost” to “profit” notes Fred Cromer, president of Bombardier Commercial Aircraft. “With this thinking in the forefront, more airlines are investing in right-sized aircraft that maximize their profits.”

In its most recent 20-year market forecast, Bombardier sees global demand for 12,500 airplanes in the 60- to 150-seat segment, with demand highest for C Series type aircraft in the 100- to 150-seat range.

Bombardier’s forecast notes the cost-per-seat instead of yield-per-passenger has resulted not only in lower profits for airlines but also in poor passenger experience. In some regions, even heavy discounting can’t fill oversized planes, while in other regions, overbooked flights are generating outrage amongst passengers.

“In that segment, there is really only two competitors, Embraer and us,” Bellemare said. “If you look at the low end of the narrow body product lines, Airbus and Boeing aren’t really there. So there will still be [only] two competitors moving forward.”

One with Airbus’ marketing and procurement muscle now behind it, which has the potential to double the value of the C Series program. (Watch for further market consolidation between Embraer and Boeing, which is concentrated on the so-called middle-of-market segment once occupied by the 757, but which now has a more defined gap in its product line versus Airbus.)

“We have the best aircraft in the 100- to 150-seat plus segment,” Bellemare insisted. “There is nothing that comes close to the C Series on range and performance. You add this to the Airbus product portfolio and you have a full portfolio covering the narrow body range. It is adding value to Airbus and it is helping the C Series to fully unleash the full value of the program.”

Bombardier’s deal to have Airbus assemble the C Series may be helping the aircraft lift off at last.

But what of the future? Was Bombardier’s gamble to go nose-to-nose with Airbus and Boeing its last? At least on the lower margin commercial aircraft side? Bombardier is looking at a re-engined version of its CRJ line, which has steadily lost ground to Embraer. Only four CRJs and seven Q400 turboprops were delivered in the last quarter and Bombardier is increasingly looking at C Series deliveries to offset lower CRJ and Q400 revenues.

It is also likely that Airbus will shelve the struggling A319neo – the smallest jet in the A320 new engine option family – which hasn’t recorded an order since 2012. “That was the last time we sold the plane,” Tom Enders, chief executive for Airbus told Bloomberg News. “That tells you something about the competition between the A319 and the C Series.

Airbus also plans to transfer C Series technologies to its product lines, another boost for Canadian aerospace. “That has always been Airbus’s strategy, to look for as much commonality between the various aircraft as possible,” Enders told a European aeronautics conference in Brussels. “The C Series is a state-of-the-art aircraft in every aspect. One of the most modern generation aircraft in terms of cockpit, in terms of material.”

A bigger concern for the Canadian aerospace industry should be Ottawa’s ongoing feud with Boeing, despite the American airplane maker’s strike to slap an 80 per cent duty on C Series deliveries to U.S. airlines (it was the U.S. Commerce Department that ratcheted the tariff’s to a ludicrous 300 per cent, an amount that is certain to get knocked down in the months ahead).

Boeing has 13 locations across Canada, including a plant in Winnipeg, which is the country’s third largest aerospace manufacturing facility. The company recently took to the airwaves and print to let Canadians know what is at stake. “Boeing contributes approximately $4 billion annually to Canada’s economic growth and development, which is nearly 14 per cent of Canada’s entire aerospace economic impact,” Kim Westenskow, managing director for Boeing Canada said. The company has 560 Canadian suppliers in its network, the largest amount outside of the United States.

As for Bombardier, 2018 should be shaping up to be its breakout year after a rough 2017. It is too early, however, to predict whether there will be a Canadian follow up act to the C Series, although a larger version of the airplane and greater commonality with the A320 should not be ruled out. The agreement with Airbus includes an option that both sides would need to agree on for the European airplane maker to buy the program in 2025. “We’re talking seven to eight years down the road,” Bellemare pointed out. “I’d say we’re going into this partnership with Airbus with the long term view of staying in the program. We like the business. Clearly, we love the product. Right now our thinking is to stay involved in the commercial aerospace segment.”