Fewer Canadians appear to be travelling to U.S. border points to take advantage of cheap flights. Plattsburgh International Airport, which serves Montreal, and Buffalo International Airport, which drains from southern Ontario, have experienced dips in the number of Canadian travellers, as a weak dollar takes a bite out of the cost advantage of buying seats on U.S. ultra low-cost carriers (ULCC) such as Spirit and Allegiant. Still, passenger traffic has climbed at Niagara Falls, suggesting there are bargains still to be had for Canadian travellers. 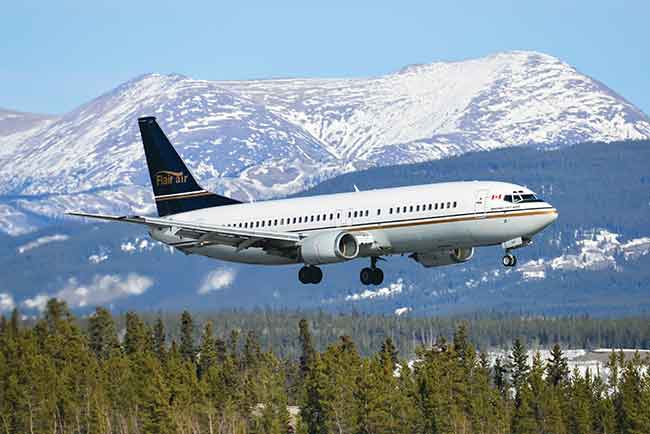 NewLeaf’s business plan is based on an Indirect Air Service Provider (IASP) model in partnership with Flair Air. Fewer Canadians appear to be travelling to U.S. border points to take advantage of cheap flights.

For most of this budget-constrained segment of the leisure market, which is estimated to have hit five million Canadian travellers as recently as 2014, the choice hasn’t been whether to fly out of a Canadian or U.S. airport. The choice has been between taking a cheap flight from a U.S. airport, packing the car for a long vacation drive, or staying home. The same scenario has played out on Canada’s highways as steep fares and fees have priced air travel out of the budget for many travellers.

Canada is the only developed economy without a ULCC. That appears set to change now that the Canadian Transportation Agency (CTA) has ruled that Winnipeg-based NewLeaf Travel Company, is a “reseller of airline services, and does not have to hold an air licence. The decision clears the way for Canada’s first ULCC to begin service. NewLeaf was scheduled to launch on Feb. 12, with an introductory $99 fare between Hamilton, Ont. and Halifax, N.S. NewLeaf’s business plan is based on an Indirect Air Service Provider (IASP) model in partnership with Flair Air, a Kelowna, B.C-based charter operator.

Under an IASP, the airline does not operate any aircraft, but markets and sells air service to the public. NewLeaf’s plan is to take the model to the next level using branded aircraft and flight crews operated by Flair Air. The CTA had granted NewLeaf an exemption from holding a direct licence, but the airline delayed its launch while the agency sorted out the rules governing licensing. “While Canada has many other IASP operators, NewLeaf is in a unique position as we are the first large-scale IASP,” says NewLeaf chief executive James Young.

The CTA ruled that, “resellers do not operate air services and are not required to hold an air licence, as long as they do not hold themselves out to the public as an air carrier operating an air service.”

Young describes the decision as a victory for Canadian travellers. “The introduction of the distinctive term ‘reseller’ in airline regulation not only clarified the role of NewLeaf in the travel marketplace, but also allows for innovation and consumer choice, while maintaining consumer protections. This backing shows that Canadian travellers truly desire an ultra low-cost air service option.”

Young believes there is a “glass half empty” attitude in Canada when it comes to air travel. “We think that as many flyers as there are out there; only Air Canada and WestJet are the ones who get to have them. We have to think about it as the ‘glass half full’. There is a chunk of the market that has stopped flying domestically because it is all too expensive.” NewLeaf market analysis shows for every one per cent drop in airfares, the market is stimulated by 1.3 per cent. “That’s the market we are going after.”

Asked why NewLeaf is chasing this market with a third-party operator, Young says it is all about focus. “If you think about 100 things that could go wrong with respect to starting up a new carrier, 75 to 80 of those things relate to the operation. The last 20 to 25 of them are how to get the butts in the seats. We decided to focus on being really excellent on doing that and leaving the rest to our partner, Flair Air.”

For an ULCC to succeed in Canada, conventional wisdom has called for at least 10 airplanes launching a route network that prevents mainline carriers from entering a price war across all points. Young isn’t big on convention. NewLeaf will launch using Flair’s two 158-passenger 737s, linking lower cost airports such as Abbotsford, B.C., but not with daily routes. Hamilton Airport, which has approximately nine million in its catchment area also fits prominently in NewLeaf’s route network.

One conventional approach NewLeaf will duplicate is the low-cost approach to ancillary fees. On average, ULCC’s such as Southwest and Europe’s Ryanair collected approximately 26 per cent of revenue from ancillary fees. Canadians can expect a ramp up of these fees beyond what the market is used to with Air Canada, WestJet and Porter. Are we ready to pay extra for a printed boarding pass?

Young says the market is already conditioned as he points to the five million Canadians a year who travelled on American ULCCs. “We are completely unbundling the product,” he insists. “Not everybody wants a no frills trip. NewLeaf is expected to resume accepting bookings soon, but a new launch date had not been set when Wings went to press. The domestic launch will be followed with flights to sun spots, where Young points out there are still a lot of secondary airport opportunities available in places like Florida. That means more equipment.

As the Boeing 737 MAX enters the market, NewLeaf expects a lot of older “Next Gen” 737s coming onto the market, bringing down the lease price for additional airplanes. “The way we look at aircraft is like Spirit and Allegiant. Young said. “We are going to look at opportunities to get well-maintained, used aircraft.” When service does begin, NewLeaf expects to go up against Air Canada rouge, WestJet and perhaps at least one more ULCC. Vancouver-based Canada Jetlines just secured financing, raising the question of who will be first out of the gate. Is there room for more than one ULCC? “If you are running a low-cost carrier and you stay disciplined to cost, you actually can be very successful,” Young says. “This is not just flash in the pan stuff.”