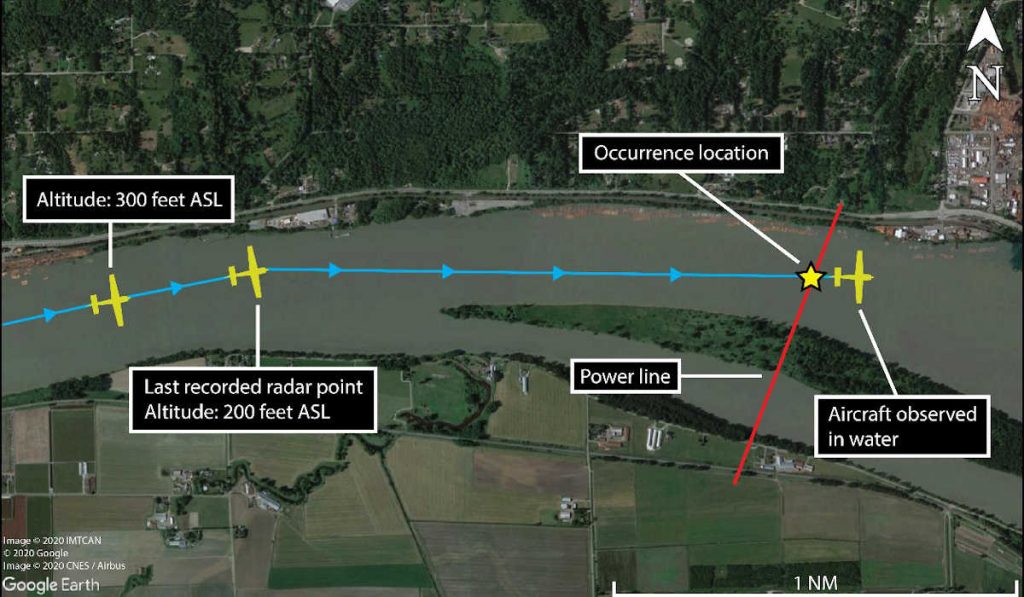 The Transportation Safety Board of Canada on January 7, 2020, released its investigation report (A20P0060) into the June 6 2020 collision with a power line of a Cessna 172M aircraft in Maple Ridge, British Columbia. The agency conducted a limited-scope, fact-gathering investigation into this occurrence, which will result in BC Hydro adding daytime strobe lights to help reduce risks of low-altitude flights in the area.

The aircraft, which vanished in British Columbia’s Fraser River during the accident, remains missing along with two people on board.

In its report, the Transportation Safety Board (TSB) notes the Cessna 172M (registration CF-CCV) operated by the International Flight Centre was conducting a local, visual-flight-rules training flight from Boundary Bay Airport (CZBB), British Columbia, with a student and a flight instructor on board.

At 1304 Pacific Time, TSB explains the instructor contacted the tower controller at Pitt Meadows Airport (CYPK) for permission to enter the control zone for circuits, but the CYPK tower controller responded that additional aircraft could not be accommodated in the circuit and the pilot should try Langley Regional Airport (CYNJ), BC, as an alternate.

At 1305, TSB explains the instructor contacted the CYNJ tower controller to request transit through the CYNJ control zone, and was cleared as requested. There were no further communications received from the aircraft, according to TSB’s report.

At 1309, the aircraft began a descent from 2,200 feet ASL, according to TSB, flying over the Fraser River near Fort Langley Water Aerodrome (CAS4), levelling briefly at 1,500 feet ASL and 300 feet ASL before it levelled at 200 feet ASL over the river when radar contact was lost at 1312:29.

The aircraft’s last recorded position was approximately 9.7 nautical miles (NM) north-northwest of Abbotsford Airport (CYXX), according to TSB, travelling eastbound at 200 feet ASL, with a groundspeed of 80 knots. At approximately 1313, TSB states the aircraft flew into a power transmission line that was strung across the Fraser River, approximately 125 feet above the water.

Observers in the area reported seeing a low-flying aircraft, according to the TSB report, and then seeing a splash in the river, before seeing the aircraft partially submerged.

TSB notes the aircraft could no longer been seen when Royal Canadian Mounted Police responders arrived; and that initial search for the aircraft was impeded by high water levels, with subsequent efforts by boats, divers, and underwater imaging equipment still unsuccessful at the time of writing the report.

The report notes the high risk of low-altitude flight in terms of hazards like power lines that are not physically marked. TSB states BC Hydro has prioritized the schedule for the commissioning of the daytime strobe lights, which should be completed in 2021. Once this work has been completed, a related NOTAM will be rescinded.